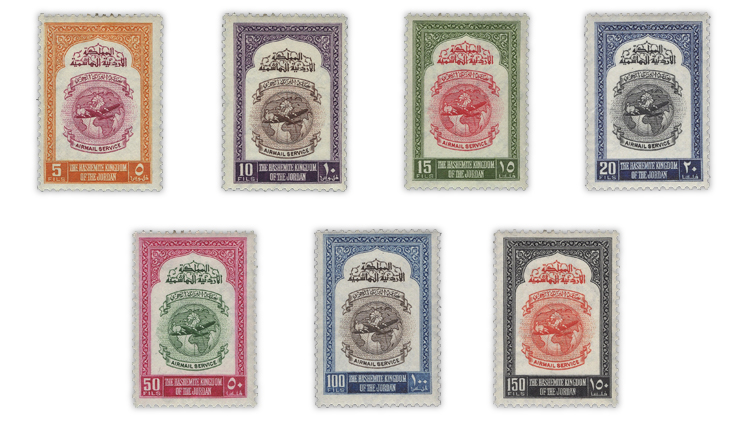 In the Dec. 26 issue of Linn’s Stamp News, Middle East Stamps columnist Ghassan Riachi provides a detailed review of Jordan’s first set of airmail stamps, which were issued in 1950.

The Dec. 26 issue of Linn’s Stamp News just landed on the presses and goes in the mail to subscribers Monday, Dec. 12. And if you subscribe to Linn’s digital edition, you’re at the head of the line with early access Saturday, Dec. 10. While you wait for your issue to arrive in your mailbox, enjoy these three quick glimpses of exclusive content available only to subscribers.

Ghassan Riachi begins his Middle East Stamps column with a question: “Have you ever wondered when each Arab country issued its first airmail stamp or stamp?” As it turns out, one of Riachi’s friend was eager to collect the first airmail stamps of each Arab country. To help his friend and other collectors of a similar mind, Riachi introduces readers to the first airmail stamps of Jordan, which were issued Sept. 16, 1950. “When the [Jordanian] postal officials decided to produce the nation’s first airmail stamps, the task of their design was given to Yacoub Sukkar,” Riachi explains. “At one time, he was the principal of the Arts and Crafts School, and in the 1940s, he became the postmaster general of the country.” In order to meet various airmail rates, a total of seven bicolor stamps were issued. Riachi provides myriad details about the stamps, so get ready for an informative read.

FDCs created by the artist of the U.S. 2022 Hanukkah stamp

Lloyd de Vries, in First-Day Covers, showcases a pair of FDCs that artist Jeanette Kuvin Oren produced for the U.S. 2022 Hanukkah stamp she designed. Among other things, de Vries relates an interesting discussion he had with Kuvin Oren about FDC envelope sizes. She told de Vries that artists who design stamps should talk to stamp collectors about first-day covers in order to learn about what collectors prefer. “Painting the cachet, locating just the right envelopes, bringing the envelopes to the First Day Ceremony, and ‘meeting’ collectors who have ordered from my website have all been fabulous experiences,” de Vries quoted Kuvin Oren as saying. De Vries concluded by observing that Kuvin Oren is interested in designing other U.S. stamps.

In each weekly issue of Linn’s, either E. Rawolik VI or E. Rawolik VII dissects the contents of a stamp mixture offered to collectors. E. Rawolik is a pseudonym that is also the word “kiloware” (a stamp mixture) spelled backward. This week, E. Rawolik VI provides an informative review of half of a packet of stamps with a promised Scott catalog value of $120. Rawolik received the stamps eight days after placing an order. “Inside was a selection of mostly large stamps that looked enticing and ready for investigation,” Rawolik writes. Most of the 46 reviewed stamps came from two countries: Iceland and Ireland. Enjoy the full review in this issue.