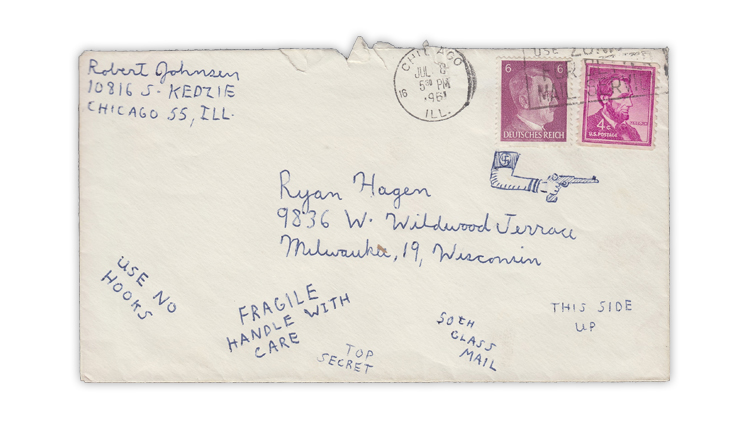 In The Odd Lot in the April 11 issue of Linn’s Stamp News, Wayne Youngblood features a marvelous cover mailed in 1961 from a juvenile collector to one of his friends. As can be seen here, the young sender decorated the envelope with humorous notes, such a

The April 11 issue of Linn’s Stamp News just landed on the presses and goes in the mail to subscribers Monday, March 28. And if you subscribe to Linn’s digital edition, you’re at the head of the line with early access Saturday, March 26. While you wait for your issue to arrive in your mailbox, enjoy these three quick glimpses of exclusive content available only to subscribers.

The cover shown here was mailed in 1961 from a young collector in Chicago to his friend in Milwaukee and, as can be seen, is festooned with juvenile humor. And, as Wayne Youngblood explains in The Odd Lot, the enclosed letter “touched on World War II, the American Civil War, the Three Stooges and more.” Other funny notes on the back of the cover (not shown) include “Attention: Postmaster Ticking is Only [a] Bomb,” “May only be opened under the authority of the President of the United States” and “Better Buy Buick.” Youngblood also illustrates the first page of the letter, which includes a decorative masthead that reads “Horace Clamtree, Slave Dealer, Official Stationary [sic].” For added context and the rest of the story about this unusual item of postal history, be sure to read the entire column.

Library rate and special handling fee for mailings of films

“Over the years, I have been blessed by collectors who ask me questions about neat items of postal history for which the postal rates are difficult to determine,” writes Tony Wawrukiewicz in Modern U.S. Mail. In this month’s column, Wawrukiewicz examines a pair of library-rate mailing cards that were once affixed to films also sent using special handling. To determine the somewhat complicated rate breakdowns for the cards, Wawrukiewicz consulted two chapters in his indispensable U.S. Domestic Postal Rates, 1872-2011. Both cards were used to mail a 5-pound package, but the rates were very different because the parcels were mailed eight years apart, in 1977 and 1985. Collectors of modern U.S. postal history will want to keep this column for future reference.

In their tip of the week, Stamp Market Tips columnists Henry Gitner and Rick Miller note a strong market for Latin American countries, with the Dominican Republic being “one of the most popular.” According to Gitner and Miller, a Dominican Republic issue to look for is the 1899-1900 set of 11 Christopher Columbus Mausoleum stamps (Scott 100-110A). “The engraved stamp designs show various scenes from Columbus’ life and voyages as well as his sarcophagus and proposed mausoleum,” Gitner and Miller explain. These attractive stamps were targeted to collectors “in hopes that they would not be used for postage and the funds from their sale could be used to defray the cost of constructing a mausoleum for Columbus’ remains,” according to Gitner and Miller, who tipped the same set in the Aug. 29, 2016, issue of Linn’s.