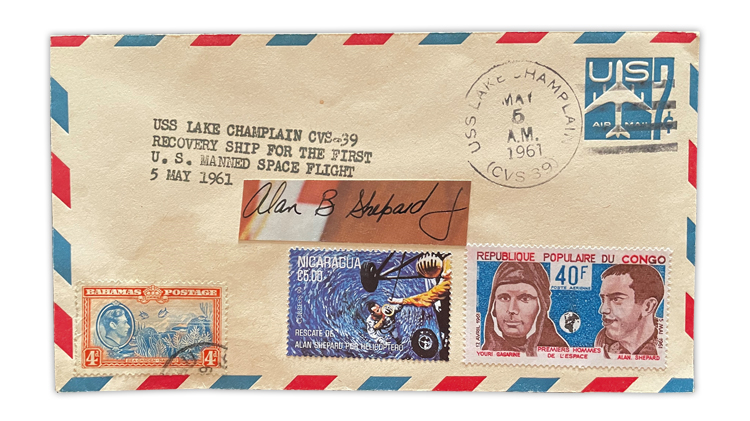 Is this naval recovery ship cover postmarked May 5, 1961, aboard the USS Lake Champlain genuine or fake? Charles J. Vukotich Jr. has the answer in Exploring Astrophilately in the Nov. 22 issue of Linn’s Stamp News.

The Nov. 22 monthly issue of Linn’s Stamp News just landed on the presses and goes in the mail to subscribers Monday, Nov. 8. And if you subscribe to Linn’s digital edition, you’re at the head of the line with early access Saturday, Nov. 6. While you wait for your issue to arrive in your mailbox, enjoy these three quick glimpses of exclusive content available only to subscribers.

In Exploring Astrophilately, Charles J. Vukotich Jr. serves up useful tips for identifying space covers that are fraudulent. “The sources of fake space covers are sometimes suspected, but often unproven. The number of people convicted for creating fake space covers is limited to one famous case,” Vukotich writes. That “famous case” is Charles Riser, a space cover dealer who “pleaded guilty to mail fraud and the fraudulent forging and selling of space covers on March 11, 1975, and received four years’ probation,” Vukotich explains. In addition to the cover shown here, Vukotich discusses two other covers. One is a confirmed fake, and the other is suspected of being fraudulent. Read the column to get all the details.

Kitchen Table Philately: worldwide stamps from A to Z

In each weekly issue of Linn’s, either E. Rawolik VI or E. Rawolik VII dissects the contents of a stamp mixture offered to collectors. E. Rawolik is a pseudonym that is also the word “kiloware” (a stamp mixture) spelled backward. This week, E. Rawolik VI sifts through a sample of 52 stamps from a larger mixture from a dealer artfully named Blackbird’s Nest. “The dates of issue ranged from 1875 to 1986. The oldest stamp was a German 10-pfennig definitive showing the imperial eagle (Scott 31). The most recent was from Great Britain’s 1986 Christmas set with the theme of customs,” Rawolik writes. Enjoy the full review in this issue.

Lloyd de Vries, in First-Day Covers, celebrates one of his passions: combination FDCs. “Such covers often bear previously issued stamps that have a connection of some sort to the new stamp. All are tied by the first-day postmark or postmarks,” de Vries explains. Some subjects, such as U.S. presidents, lend themselves well to combo FDCs because they are shown on more than one stamp. Combo covers can be created using U.S. stamps and issues from another country, “as long as all U.S. postmarks also tie mint U.S. postage,” de Vries writes. To show what is possible, de Vries illustrates a quartet of colorful combo FDCs. The cachet of one of these covers, as de Vries reveals in his column, was produced by a current member of the Linn’s editorial staff.