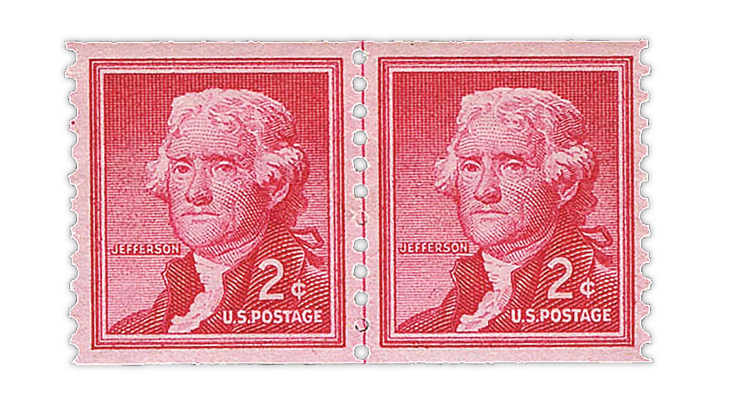 Of all the denominations in the popular United States Liberty series, the 2¢ Thomas Jefferson was in service longer than any of the others. In Spotlight on Philately, Ken Lawrence provides a detailed review of this workhorse definitive stamp and its numer

The Aug. 16 monthly issue of Linn’s Stamp News just landed on the presses and goes in the mail to subscribers the week beginning Monday, Aug. 2. And if you subscribe to Linn’s digital edition, you’re at the head of the line with early access Saturday, July 31. While you wait for your issue to arrive in your mailbox, enjoy these three quick glimpses of exclusive content available only to subscribers.

“The 2¢ Jefferson stamps remained in service longer than any of the other denominations in the Liberty series, paying several important postal rates,” writes Ken Lawrence in Spotlight on Philately. This regular-issue stamp picturing the nation’s third president was issued in multiple formats, and Lawrence carefully reviews how they were produced and used in the mail. Included with the column is a checklist that provides pertinent details about the 14 varieties of the 2¢ Jefferson. Much more awaits in Lawrence’s column, so be sure to read it in its entirety. Liberty series specialists will want to keep this column handy for future reference.

Marie Curie and her family left a singular scientific legacy

Marie Curie was the first woman to win the Nobel Prize. Members of her family also achieved recognition in other fields of endeavor. Larry Rosenblum, in Philately of France, takes readers on a philatelic tour of the Curie family and their numerous achievements. Among the highlights is Marie Curie’s work to isolate a sample of pure radium, for which she was awarded the Nobel Prize in chemistry in 1911. The centennial of this achievement is honored on a stamp that France issued in 2011, which was the International Year of Chemistry. Rosenblum’s biography of the Curie family is one you won’t want to miss.

Are you casting about for a new area to collect that is both fun and challenging? Then consider collecting Great Britain’s booklets. In Great Britain Philately, Matthew Healey opens with an enticing teaser: “Imagine a whole next level of Great Britain philately waiting out there beyond the preprinted album pages, enticing you with fresh horizons of commemorative subjects, topicals, technical specializations and a renewed thrill of pursuit.” Healey then artfully traces the history of British booklets from their genesis in 1904 right up to the present day. It’s a fascinating story that is entertaining, insightful and well worth your time to read.