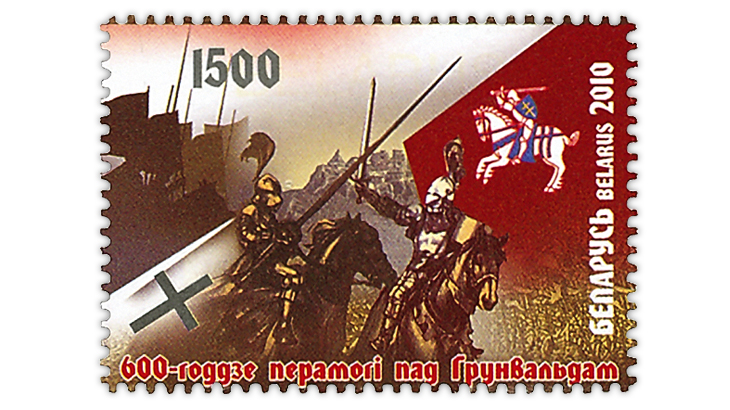 In Stamps of Eastern Europe in the June 27 issue of Linn’s Stamp News, Rick Miller reviews the philatelic legacy of Vytautas the Great, who served as an important symbolic figure for Lithuania in the early 20th century.

The June 27 issue of Linn’s Stamp News just landed on the presses and goes in the mail to subscribers Monday, June 13. And if you subscribe to Linn’s digital edition, you’re at the head of the line with early access Saturday, June 10. While you wait for your issue to arrive in your mailbox, enjoy these three quick glimpses of exclusive content available only to subscribers.

Following their country’s re-emergence in the aftermath of World War I, the Lithuanian government desired a symbol to energize Lithuania’s sense of nationhood. “Grand Duke Vytautas the Great (ruled 1392-1430), known as Vytautas Didysis in Lithuanian, was one of the symbols chosen,” writes Rick Miller in Stamps of Eastern Europe. Vytautas’ selection was appropriate, given the extraordinary life he led. Miller showcases a number of stamps to introduce readers to the various personalities who influenced Vytautas. One of the pivotal events described by Miller is the 1410 Battle of Grunwald, during which Vytautas, as commander of the Lithuanian forces, helped deliver a crushing defeat to the German Teutonic Knights. The 600th anniversary of this battle is commemorated on the 2010 Belarus stamp shown here. Miller has much more to say, so be sure to enjoy the entire column.

In his First-Day Covers column, Lloyd de Vries sings the praises of various directories of cachetmakers, beginning with the American First Day Cover Society’s Directory of Current Cachetmakers. To be included in the AFDCS directory, which is available for free on the society’s website, a cachetmaker need only complete a simple form on the website or send the information by email or regular mail to the directory’s editor. “The information that may be included in a listing is the name of the cachet line, the name of the person or organization producing it, mailing address, email address, website address, telephone numbers, formats, whether cachets are produced for every issue or just some, and the year and Scott catalog number for the first issue for which an FDC was produced,” de Vries explains. He goes on to wonder why more cachetmakers aren’t listed in the directory and provides a useful history of the directory’s evolution since the mid-1970s.

Lebanon, an original member state of the United Nations, issued two airmail stamps Oct. 24, 1971, in honor of the 25th anniversary of the United Nations, which occurred in 1970. The theme of the stamps was peace, justice and progress. Ghassan Riachi writes in detail about these eye-catching stamps in Middle East Stamps. Riachi provides a quick history of the United Nations, beginning with the intergovernmental organization’s precursor, the League of Nations, which was established by the Paris Peace Conference on Jan. 10, 1920. He then takes readers through a careful review of the stamps’ design, production and availability in the philatelic marketplace. Riachi concludes his column on a high note: “I recommend that everyone buy this 50-year stamp set as a reminder that we still have time to make the stamps’ theme of peace, justice and progress a reality.”