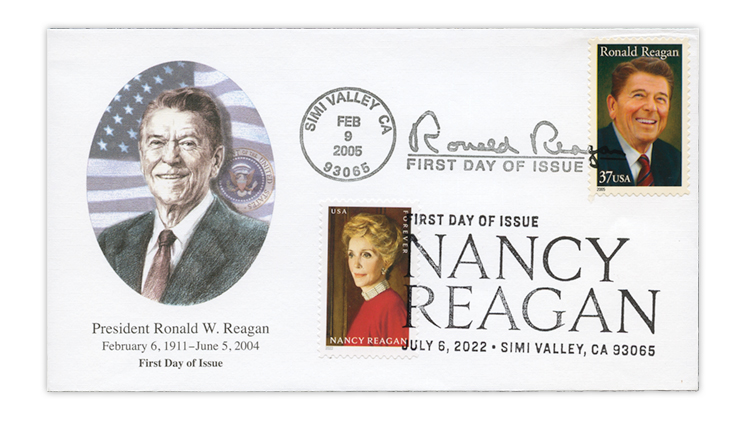 In a feature article in the Aug. 8 issue of Linn’s Stamp News, Charles Snee shares a few of the more interesting pieces of mail to cross his desk in recent weeks. One of the items is this nice combination first-day cover for stamps honoring Ronald and Nan

The Aug. 8 issue of Linn’s Stamp News just landed on the presses and goes in the mail to subscribers Monday, July 25. And if you subscribe to Linn’s digital edition, you’re at the head of the line with early access Saturday, July 23. While you wait for your issue to arrive in your mailbox, enjoy these three quick glimpses of exclusive content available only to subscribers.

For Linn’s senior editor Charles Snee, one of the perks of being a philatelic journalist is seeing the mail that crosses his desk from one week to the next. “Sometimes days or weeks go by without spotting something unusual,” Snee writes. “Such was not the case in early July when several interesting items showed up.” Among these desirable pieces of modern postal history is the illustrated combination first-day cover for stamps honoring Ronald and Nancy Reagan. Snee concludes with a very eye-catching mailing from Iceland. Dig into the column to learn what it is.

A tale of confusion: the two U.S. Audubon stamps

Wayne L. Youngblood, in his The Odd Lot column, focuses initially on the confusion that two United States stamps (a 1963 5¢ commemorative and a 1967 20¢ airmail) with almost identical designs sowed in the mind of one postal clerk when processing a cover mailed in 1968. “The only differences between the 1963 and 1967 stamps are the denominations and the ‘AIR MAIL’ inscription and phosphorescent tagging on the 1967 stamp,” Youngblood explains. “The 1963 commemorative is not tagged.” There is more to this perplexing philatelic story, so be sure to read to the end.

“In late June, I received two almost immediate emails from readers who both addressed nicely an error I made in my column in the July 11 issue of Linn’s Stamp News,” writes Tony Wawrukiewicz in his Modern U.S. Mail column. The error involves the specific postal rate for a fourth-class card franked with 24¢ postage on both sides that was used to mail a container carrying a film back and forth between two addresses. What Wawrukiewicz couldn’t explain in his July column, given a specific mailing designation handstamped on the card, was the 24¢ postage rate for a motion picture film weighing up to 5 pounds. Two readers, one of whom writes regularly for Linn’s, pointed Wawrukiewicz to specific U.S. postal references that discuss the rate in question.