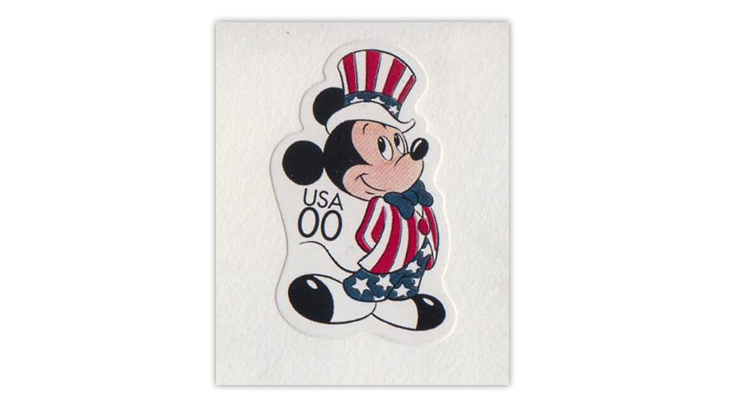 In a special feature in the June 14 issue of Linn’s Stamp News, William Silvester embarks on a journey to discover the origin and purpose of this die-cut-to-shape label picturing Mickey Mouse. Along the way Silvester reached out to prominent philatelists

The June 14 issue of Linn’s Stamp News just landed on the presses and goes in the mail to subscribers Monday, May 31. And if you subscribe to Linn’s digital edition, you’re at the head of the line with early access Saturday, May 29. While you wait for your issue to arrive in your mailbox, enjoy these three brief summaries of exclusive content available only to subscribers.

Mickey Mouse mystery: Is it a stamp, test or label?

In an engaging and informative feature article, William Silvester attempts to track down the origin of a colorful, die-cut-to-shape label picturing Mickey Mouse, one of Disney’s most recognizable characters. This mysterious item, which is affixed to an envelope with an Avery Dennison corner card that in turn is affixed to a thin black card, came to Silvester’s attention while perusing the website of Henry Gitner Philatelists Inc. Gitner offered the cover bearing the label for $1,250 in an ad published in the Jan. 18, 2021, issue of Linn’s. Silvester provides a detailed history of Avery Dennison before engaging with what he calls “prominent members of the philatelic community” to determine how best to describe the Mickey Mouse label. Silvester shares some of the experts’ replies in his article to give readers a clear picture of how their thinking informed Silvester’s approach to learning more about the label’s purpose and origin. After weighing the available evidence, Silvester renders a verdict. Whether you agree or disagree, Silvester’s story is well worth reading.

“I have been fascinated with United States prison covers, both outgoing and the far scarcer incoming, for many years,” writes Wayne Youngblood in The Odd Lot. This fascination has spurred Youngblood to write extensively about prison mail. In this fascinating overview, Youngblood begins with a 1976 cover sent from an inmate at the Metropolitan Correctional Center in New York City. He provides a short list of some of the more infamous characters who have been incarcerated there, including Gambino crime family boss John Gotti and Mexican drug lord Joaquin “El Chapo” Guzman. Youngblood writes that before the 1980s, much prison mail “wasn’t specifically marked as such.” That is not the case today. To make this point, Youngblood pictures the back of a 1990 prison cover that is almost entirely covered with a red handstamp that “clearly states the prison’s policy on outgoing inmate mail.” The third cover Youngblood discusses is the most intriguing of all. Be sure to read to the end to get all the details.

Inside Linn’s: A brief history of collecting astrophilately