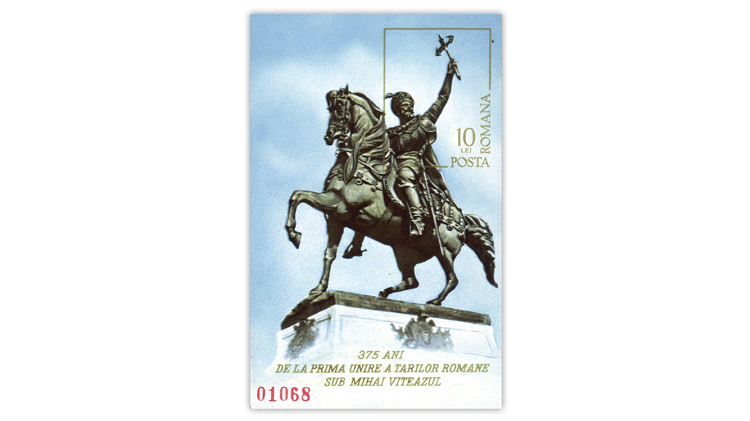 In the Jan. 2 issue of Linn’s Stamp News, Stamps of Eastern Europe columnist Rick Miller celebrates the dynamic life and philatelic legacy of Michael the Brave of Romania.

The Jan. 2 issue of Linn’s Stamp News just landed on the presses and goes in the mail to subscribers Monday, Dec. 19. And if you subscribe to Linn’s digital edition, you’re at the head of the line with early access Saturday, Dec. 17. While you wait for your issue to arrive in your mailbox, enjoy these three quick glimpses of exclusive content available only to subscribers.

In Stamps of Eastern Europe, Rick Miller begins thus: “The eastern European nation of Romania comprises three historic regions: Wallachia, Moldavia and Transylvania. Michael the Brave (1558-1601), also known as Mihai Patrascu, who was the first to rule all three regions, is Romania’s greatest national hero.” Miller goes on to chronicle Michael’s rise to power using a colorful array of Romanian stamps. One of them, the souvenir sheet shown here, pictures an equestrian statue of Michael the Brave. The bronze sculpture by Albert-Ernest Carrier-Belleuse was erected on the grounds of the University of Bucharest in 1874. There’s much more to learn about this dynamic leader, so be sure to read to the end.

Charles Snee, in Dollar-Sign Stamps, features a 1998 business reply mail cover (shown front and back) from the Franklintown Community Fire Co. in Franklintown, Pa., comes with a nice surprise on the back. As Snee explains, “A total of $83.20 in postage is affixed to the back: a block of six and a block of four of the 1992 printing of the $5 Bret Harte stamp (Scott 2196b), three pairs of the 1994 $5 Washington and Jackson stamp (2592), a 1996 $3 Space Shuttle (2544b) and a 1993 20¢ Harry S. Truman stamp (1862d).” The cover came Snee’s way via a stamp dealer, who provided a detailed explanation for the noticeably large franking. Snee also raises two questions about the cover. Read the column to learn what they are and how he answered them.

In New Books, Linn’s Stamp News reviews North Atlantic Non-Contract Steamship Sailings, 1838-1875 by two renowned postal historians, Richard F. Winter and John H. Barwis. In the book, the authors provide “the sailing data of 54 steamship lines operating in the North Atlantic between 1838 and 1875,” according to Linn’s. The new book, which was published by the American Philatelic Society this year, is a companion volume to the 1988 North Atlantic Mail Sailings 1840-1875 by Walter Hubbard and Winter. “That 1988 volume continues to serve as the key reference source for the operations of the 31 steamship companies that carried pre-General Postal Union (GPU) contract mails,” Linn’s said. Ordering details are available from the APS.