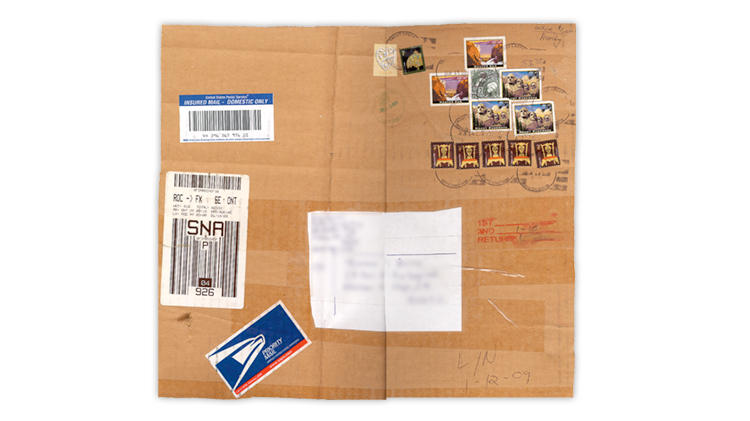 The Aug. 1 issue of Linn’s Stamp News just landed on the presses and goes in the mail to subscribers Monday, July 18. And if you subscribe to Linn’s digital edition, you’re at the head of the line with early access Saturday, July 16. While you wait for your issue to arrive in your mailbox, enjoy these three quick glimpses of exclusive content available only to subscribers.

Charles Snee highlights a pair of 2009 Priority Mail covers that came to his attention via a Linn’s subscriber in California who regularly reads his Dollar-Sign Stamps column. On the large box top shown here, six different dollar-denominated stamps paid the bulk of the postage on the package, which weighed between 24 and 25 pounds: three 2008 $4.80 Mount Rushmore Priority Mail stamps (Scott 4268), two 2008 $16.50 Hoover Dam Priority Mail Express stamps (4269) and one 1994 $5 Washington and Jackson stamp (2592). The three design-different stamps are shown up close in Snee’s column.

“I don’t want to spend a lot of time creating album pages myself,” opines William F. Sharpe in his Computers and Stamps column. “I also don’t want to spend a lot of money buying printed albums.” To help other collectors save time and money, Sharpe reviews a number of specialty programs that can be used to make album pages. Free programs include LibreOffice Draw, Scribus and Inkscape. Microsoft Publisher, Adobe InDesign and Affinity Publisher are among the more recognizable commercial programs. AlbumGen by Softpro is “specifically dedicated to stamp album pages,” according to Sharpe. Also highlighted by Sharpe are AlbumEasy and FreeStampAlbum.com. Read the column to get the details.

In each weekly issue of Linn’s, either E. Rawolik VI or E. Rawolik VII dissects the contents of a stamp mixture offered to collectors. E. Rawolik is a pseudonym that is also the word “kiloware” (a stamp mixture) spelled backward. This week, E. Rawolik VI takes a close look at a packet of 28 mint, never-hinged stamps from 20 different countries. A 1988 stamp from Nicaragua picturing a speaker talking to journalists came in with the highest Scott catalog value, $3.50. A set of three Falkland Islands stamps issued in 1979 shows stamp-on-stamp illustrations, one of which pictures Rowland Hill and a certain famous stamp issued in 1840. Enjoy the full review in this issue.