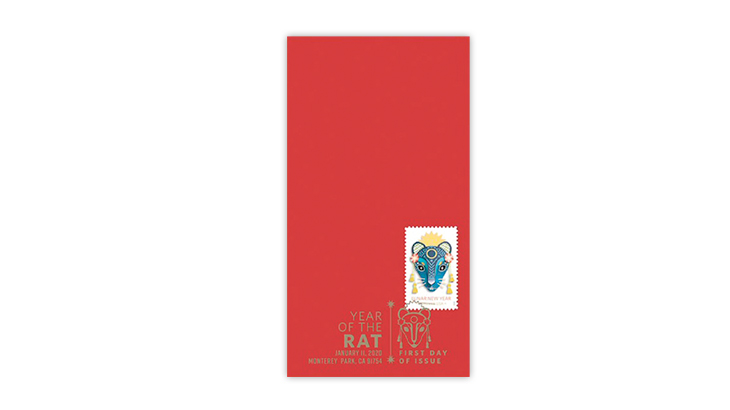 In First-Day Covers in the Feb. 24 issue of Linn’s Stamp News, Lloyd de Vries brings to collectors’ attention a first-day cancel in gold for the recently issued United States Year of the Rat stamp that is available only on a U.S. Postal Service FDC. The U

The Feb. 24 issue of Linn’s Stamp News just landed on the presses and goes in the mail to subscribers Monday, Feb. 10. And if you subscribe to Linn’s digital edition, you’re at the head of the line with early access Saturday, Feb. 8. Here we heighten your philatelic anticipation with three glimpses of exclusive content available only to subscribers.

First-Day Covers columnist Lloyd de Vries opens his column with a warning: “First-day cover collectors who like to have an example of every cancellation for a United States issue may have run into a roadblock.” The “roadblock” to which de Vries refers is a somewhat unusual FDC for the United States Year of the Rat stamp that features a cancellation in gold ink. The FDC was not available for purchase until Feb. 21, almost six weeks after the stamp’s Jan. 11 official first day.

In late December 2019, Ghassan Riachi made what he calls an “exciting discovery” on one of the 1925-26 Hejaz railway tax stamps of Saudi Arabia. His find came after spending countless hours studying these stamps and the history behind them. The variety, from just one position in a sheet of 36 stamps, pictures a locomotive that is missing an important safety feature. To learn what it is, dig into Riachi’s Middle East Stamps column.

In each weekly issue of Linn’s, either E. Rawolik VI or E. Rawolik VII dissects the contents of a stamp mixture offered to collectors. E. Rawolik is a pseudonym that is also the word “kiloware” (a stamp mixture) spelled backward. This week, E. Rawolik VI orders a packet of 100 stamps from Nepal. His favorable report notes that the stamps are somewhat older and have interesting designs. Read the full column to learn more.