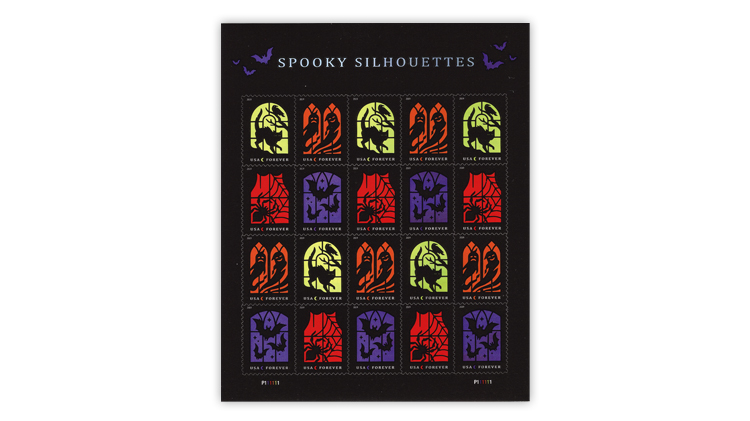 The proliferation of counterfeit stamps is motivating postal administrations to come up with new ways to protect their postal issues and the revenue they generate. Joe Brockert reviews some of the current efforts in Philatelic Backstory in the March 21 is

The March 21 monthly issue of Linn’s Stamp News just landed on the presses and goes in the mail to subscribers Monday, March 7. And if you subscribe to Linn’s digital edition, you’re at the head of the line with early access Saturday, March 5. While you wait for your issue to arrive in your mailbox, enjoy these three quick glimpses of exclusive content available only to subscribers.

The United States 2019 Spooky Silhouettes pane shown here appears genuine at first glance, but it is a counterfeit. “Counterfeit stamps have seen an alarming spike worldwide in recent years. Governments and postal systems are concerned and are exploring ways to combat the growing problem,” writes Joe Brockert in Philatelic Backstory. He begins with a recent example: new definitive stamps from Great Britain that have attached barcodes. But there is a downside because “these new stamps will lead to the eventual demonetizing of older stamps that do not include the new feature (in other words, rendering them invalid for postage). Collectors — somewhat understandably — are concerned,” Brockert explains. He goes on to review the challenges that counterfeit stamps pose for the United States Postal Inspection Service and other enforcement agencies. Brockert’s sober assessment is well worth reading.

In Nordic Stamp Scene, Christer Brunström explores the fascinating history of a set of Swedish semipostal stamps issued during 1916-18 to support the Swedish territorial army known as the Landstormen. In particular, the surcharge from the sale of the stamps was used to provide funding for the territorial army’s uniforms. “These are interesting stamps that have intrigued collectors for years, and the full truth of exactly what happened is still shrouded in darkness,” Brunström writes. Brunström sheds much light on these intriguing issues. His story begins with stamp dealer Harry Wennberg, who oversaw the distribution agency that handled sales of the stamps. Brunström meticulously reviews how the stamps were produced and highlights some of the impressive postal history that resulted from their use.

In honor of the 200th anniversary of the birth of Ulysses S. Grant, Martin H. Joyce celebrates some of the 30 different U.S. stamps and postal stationery items that have featured the 18th president of the United States. He also features stamps from some of the eight countries other than the United States that have honored Grant. “Grant’s first appearance on a U.S. postal item occurred in August 1886, when the Post Office Department issued a 2¢ letter sheet showing him in uniform,” writes Joyce. It didn’t take long for Grant to first appear on a U.S. postage stamp. You can learn when that stamp was issued and much more by reading Joyce’s informative feature.