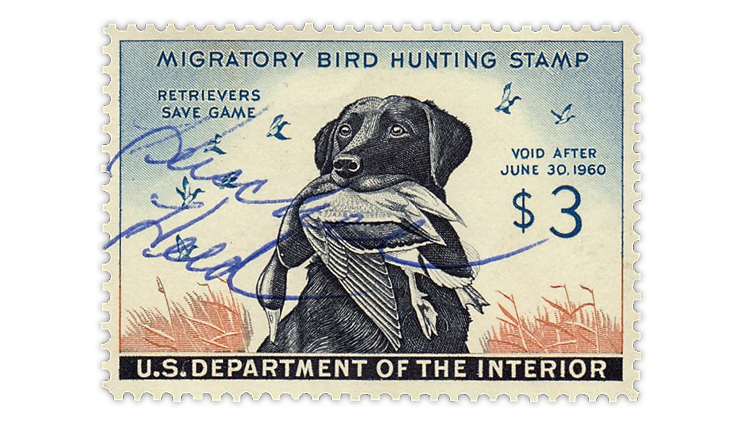 The May 11 issue of Linn’s Stamp News just landed on the presses and goes in the mail to subscribers Monday, April 27. And if you subscribe to Linn’s digital edition, you’re at the head of the line with early access Saturday, April 25. While you wait for your issue to arrive your mailbox, enjoy these three previews of exclusive content available only to subscribers.

The signature on two United States federal duck stamps prompts The Odd Lot columnist Wayne Youngblood to take advantage of modern internet search techniques, including Boolean searches, to learn more about Herschel Held, the man who signed the stamps. By refining his searches, Youngblood eventually discovers that Held was a minor league baseball player during an 11-year span from 1942 to 1952. “Over the course of 1,133 games, he hit .268 with 205 doubles, 47 triples and 69 home runs,” Youngblood writes.

Clearing up a question about New Zealand airmail rates

In Modern U.S. Mail, Tony Wawrukiewicz illustrates a 1938 airmail letter from Chicago, Ill., to Christchurch, New Zealand, to point out some rate errors in U.S. International Postal Rates 1872‑1996, the reference book he co-authored with Henry W. Beecher. The 57¢ franking on the cover, which transited through London, encompasses three different rates, one of which, as Wawrukiewicz explains, is missing from the relevant table in the international rates book: the 44¢ airmail rate from London to New Zealand. Read the entire column to get the complete rate breakdown.

In each weekly issue of Linn’s, either E. Rawolik VI or E. Rawolik VII dissects the contents of a stamp mixture offered to collectors. E. Rawolik is a pseudonym that is also the word “kiloware” (a stamp mixture) spelled backward. This week, E. Rawolik VII samples a worldwide mixture of stamps from a dealer in Indiana. Enjoy the full review in this issue. “This was a good mixture. The catalog value exceeded the ad’s promise substantially. There were plenty of stamps, some older and some newer, and they were well distributed among several countries,” Rawolik writes. One stamp from the Gold Coast had a Scott catalog value of $12. Read the column to learn why.

Inside Linn’s: Flora and Fauna $2 Bobcat saw regular use on mail