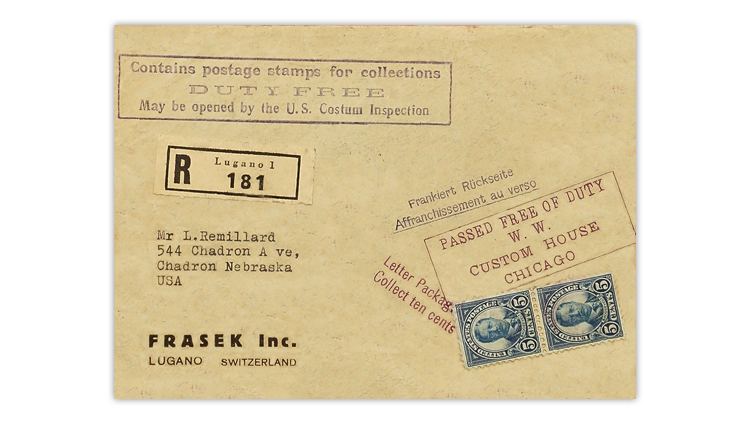 In Modern U.S. Mail in the July 13 issue of Linn’s Stamp News, Tony Wawrukiewicz documents two examples of definitive stamps used to pay postage due. Two 5¢ Theodore Roosevelt stamps were used to pay the customs clearance fee on this 1935 cover sent from

The July 13 issue of Linn’s Stamp News just landed on the presses and goes in the mail to subscribers Monday, June 29. And if you subscribe to Linn’s digital edition, you’re at the head of the line with early access Saturday, June 27. While you wait for your issue to arrive in your mailbox, enjoy these three brief reviews of exclusive content available only to subscribers.

“The use of ordinary (regular-issue) United States stamps as postage due stamps is a complex process to explore,” writes Tony Wawrukiewicz in Modern U.S. Mail. Building on his studies of this subject in his column in the May 13, 2019, Linn’s, Wawrukiewicz looks at two covers where ordinary stamps were used to pay postage due. His research of the relevant postal regulations reveals that one of the covers probably represents an illegal postage due use. As for the second cover, the nature of the postage due use is uncertain. You’ll have to read the column to learn the details.

Wayne L. Youngblood, in The Odd Lot, digs into one of his favorite subjects: the 1904 World’s Fair. “The fair originally was officially known as the Universal Exposition at St. Louis. It then became the Louisiana Purchase Exposition,” Youngblood explains. What captures his eye this time is a 1902 cover mailed from St. Louis, Mo., to Hadlyme, Conn., that he describes as “the earliest form of Louisiana Purchase Exposition mail known.” Inside the cover is a fascinating four-page form letter designed to secure support for the fair. The letterhead page touted the 1803-1903 World’s Fair, which made the page obsolete because the fair had been postponed until 1904. Youngblood also reveals a subtle feature of the letterhead that is a new discovery. Dig into the column to learn what it is.

In each weekly issue of Linn’s, either E. Rawolik VI or E. Rawolik VII dissects the contents of a stamp mixture offered to collectors. E. Rawolik is a pseudonym that is also the word “kiloware” (a stamp mixture) spelled backward. This week, E. Rawolik VI compares a worldwide mixture to a similar assortment ordered about a year ago from the same dealer. “When comparing this review to the one in 2019, I discovered more similarities than just the wording of the advertisement,” Rawolik explains. He notes, for example, that both packets contained stamps from the same countries. Among the more pleasant discoveries in the this week’s review was finding a 2005 Birds definitive from Zimbabwe valued at $13.