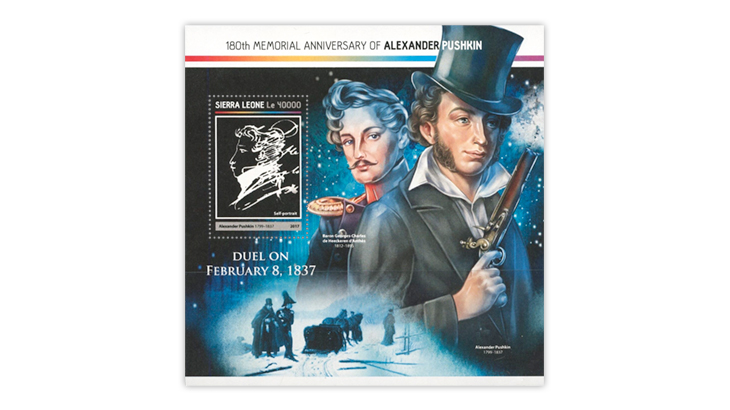 In Stamps of Eastern Europe in the Oct. 26 issue of Linn’s Stamp News, Rick Miller reveals literary, religious and diplomatic connections between Russia and Ethiopia. One such connection, the poet and playwright Alexander Pushkin, is shown on this Sierra

The Oct. 26 issue of Linn’s Stamp News just landed on the presses and goes in the mail to subscribers Monday, Oct. 12. And if you subscribe to Linn’s digital edition, you’re at the head of the line with early access Saturday, Oct. 10. While you wait for your issue to arrive in your mailbox, enjoy these three brief reviews of exclusive content available only to subscribers.

Stamps highlight literary and other connections between Russia and Ethiopia

It’s no secret that stamps are fascinating windows into the past. And sometimes when we peer for a closer look, we discover fascinating connections among people, places and events. Rick Miller, in Stamps of Eastern Europe, introduces readers to some of the philatelic links between Russia and Ethiopia, the oldest Christian nation in Africa. Miller begins with the celebrated Russian poet and playwright Alexander Pushkin, who claimed to descend from an Ethiopian ancestor on his mother’s side. Pushkin is shown on a 2017 Sierra Leone souvenir sheet that commemorates the fatal duel with his brother-in-law that led to Pushkin’s death on Jan. 29, 1837. Miller also explores how Orthodox Christianity influenced both nations through the relationship between Ethiopian Emperor Menelik II and Russian Czar Alexander III. Miller then introduces readers to Nikolay Stefanovich Leontiev, the man responsible for the establishment of diplomatic relations between Russia and Ethiopia. Read the column to learn more about the exploits of Leontiev, whom Miller calls an “incorrigible scoundrel.”

When were stamps issued in Mecca first used in Medina?

Saudi Arabia collector and specialist Ghassan Riachi answers this provocative question in his Middle East Stamps column. Riachi sets the stage by providing a detailed review of the history behind the stamps, beginning with the 1916 formation of the Kingdom of Hejaz on the Arabian peninsula. A key point to remember is that the two holiest places in Islam, Mecca and Medina, were located in the kingdom. The power struggles between the kingdom and the Sultanate of Nejd led to the Nejdis’ capture of Medina in late 1925, which then led to the opening of the post office and the subsequent conversion of Hejaz stamps to Nejd stamps via the use of two handstamps created by the Nejdi authorities. Riachi points out that these handstamps were only used in Medina. Furthermore, the overprinted stamps were canceled with a distinctive octagonal postmark that was applied at the Media post office. Overprinted stamps bearing the Medina postmarks are rare; they are known only off cover or on piece. During his 35 years of research and study, Riachi has collected 14 examples, just five of which have readable dates in the postmarks. Read the column to discover which of these five stamps answers the question.

In each weekly issue of Linn’s, either E. Rawolik VI or E. Rawolik VII dissects the contents of a stamp mixture offered to collectors. E. Rawolik is a pseudonym that is also the word “kiloware” (a stamp mixture) spelled backward. This week, E. Rawolik VII explores a compact assortment of 37 stamps from 10 countries. Rawolik was most pleased with the results: “There was a good mix of countries, the material was recent, and the stamps were interesting.” All of the stamps were valued at $1 or more in the Scott catalog, and most of them were issued between 1998 and 2018. Rawolik notes that 13 of the stamps feature birds, which are a popular topical subject. A stamp picturing an American flamingo came in with the highest catalog value, at $8. You’ll have to read the column to learn which country issued this stamp.