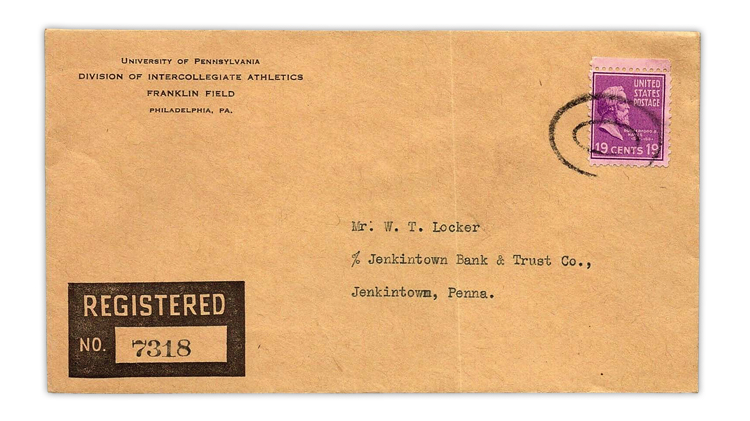 This 1939 registered cover franked with a solo United States 19¢ Rutherford B. Hayes stamp from the popular Presidential, or Prexie, series was recently auctioned online for almost $900. Ronald Blanks fills in the details in his engaging feature in the No

The Nov. 8 issue of Linn’s Stamp News just landed on the presses and goes in the mail to subscribers Monday, Oct. 25. And if you subscribe to Linn’s digital edition, you’re at the head of the line with early access Saturday, Oct. 23. While you wait for your issue to arrive in your mailbox, enjoy these three quick glimpses of exclusive content available only to subscribers.

Ronald Blanks brings to light an undescribed United States 19¢ Prexie solo cover that recently sold on eBay for a bit less than $900. The registered cover was mailed Nov. 6, 1939, from Philadelphia to Jenkintown, Pa. Blanks explains why solo uses of the 19¢ Rutherford B. Hayes stamp (Scott 824) are so scarce: “The 19¢ stamp as a single franking use is very scarce on letter mail because it met so few combinations of rates and fees and those occurrences seldom arose.” It is much more common to find covers franked with a combination of stamps to make up an unusual rate such as 19¢. After summarizing the auction results, Blanks provides a review of other auction realizations for solo 19¢ Hayes covers and on-cover values for the 19¢ Hayes in the Scott Specialized Catalogue of United States Stamps and Covers.

Cover from city of one still provides amusement

In The Odd Lot, Wayne L. Youngblood recalls a prized possession from his days as a young philatelist: a cover postmarked from Meteor City, Ariz., which was purported to have a population of one at the time the cover was mailed in the summer of 1942. Included with the cover are a newspaper clipping and a jaunty note from Jack Newsum, the sender of the cover. Youngblood recounts Newsum’s connection with Meteor City, which, as it turns out, was never a city. “It started as a Texaco gas station located on the long Arizona stretch of Route 66 about 6 miles from the well-known Meteor Crater attraction,” Youngblood writes. Newsum was quite a promoter, as Youngblood recounts in the rest of his column.

An unpaid postcard mailed from Philadelphia to Germantown, Pa., in 1912 serves as the focal point of Tony Wawrukiewicz’s Modern U.S. Mail column. The card is franked with a 1¢ postage due stamp that was applied when the card was received unpaid in Philadelphia. Citing a ruling from the December 1879 Postal Guide, Wawrukiewicz explains that the card was not assessed the double rate of 2¢ for being unpaid because it was a local, or drop-type, card. “Even though this ruling is stated for letters, the fact is that postcards were handled the same way,” Wawrukiewicz explains. Read to the end to learn how the card was handled when it arrived in Germantown.