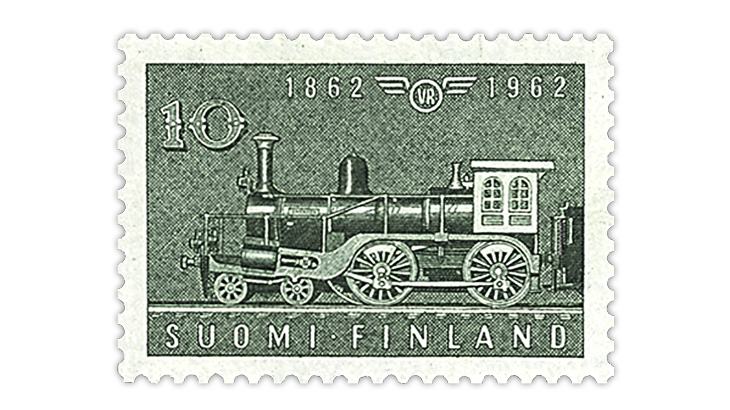 In Nordic Stamp Scene in the March 16 issue of Linn’s Stamp News, Christer Brunstrom takes readers on a tour of the various railways and locomotives depicted on stamps from a quartet of Scandinavian countries. Shown is a 1962 stamp from Finland picturing

The March 16 monthly issue of Linn’s Stamp News just landed on the presses and goes in the mail to subscribers Monday, March 2. And if you subscribe to Linn’s digital edition, you’re at the head of the line with early access Saturday, Feb. 29. While you wait for your issue to arrive, enjoy these three capsule reviews of exclusive content available only to subscribers.

Railroads featured on stamps from Scandinavia

Christer Brunstrom, in Nordic Stamp Scene, shows how you can build a handsome railroad topical collection using postage and parcel stamps from Scandinavian countries. Brunstrom launches his railway tour with Denmark, explaining that Denmark’s eye-catching railroad parcel stamps “were intended to advertise the region served by the railroad, thus drumming up even more business.” His history lesson continues with rail-themed stamps from Sweden, Norway and Finland.

Unlocking the meaning of control numbers on Swiss franchise stamps

Richard T. Hall begins his Swiss Stamp Scene column, thus: “When sorting through a group of Swiss stamps, have you ever come across a stamp that … had a little number printed on it?” Hall goes on to explain that those tiny numbers are the hallmark of Swiss franchise stamps, which were used to frank mail from institutions and charity organizations that had been granted free mail privileges by the Swiss government. He also shows how to distinguish franchise stamps from Swiss postage due stamps of similar design.

In Covering the World, Ken Lawrence highlights the British 1944 3-penny purple King George VI airmail postal card that was issued for “United Kingdom residents to correspond with their loved ones who had been captured in combat by Japanese armed forces and were confined in distant prisoner-of-war camps.” Lawrence notes that a 1½d brown airmail postal card of identical design was issued in 1945 for the same purpose.