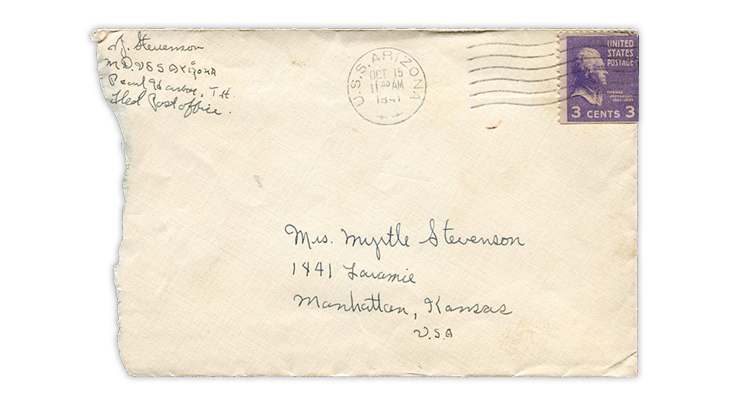 In a feature in the Dec. 7 issue of Linn’s Stamp News, noted military postal historian Ken Lawrence shares the story of a young United States Marine who was killed in action aboard the USS Arizona during the Japanese attack on Pearl Harbor Dec. 7, 1941.

The Dec. 7 issue of Linn’s Stamp News just landed on the presses and goes in the mail to subscribers Monday, Nov. 23. And if you subscribe to Linn’s digital edition, you’re at the head of the line with early access Saturday, Nov. 21. While you wait for your issue to arrive in your mailbox, enjoy these three capsule summaries of exclusive content available only to subscribers.

In a poignant feature, postal historian Ken Lawrence shares the story of Pfc. Frank Jake Stevenson, a young United States Marine who lost his life while serving aboard the USS Arizona during the Japanese attack on Pearl Harbor, Hawaii, on Dec. 7, 1941. A focal point of Lawrence’s remembrance of Stevenson is a letter Stevenson wrote to his mother less than a month and a half before he died. In the letter Stevenson described a harrowing collision between two American battleships during nighttime maneuvers at sea. The emotional impact of the letter is heightened because Lawrence provides a complete transcription. Near the end of his missive, Stevenson proudly tells his mother about his recent promotion to private first class and the “six dollar raise in pay” that he received. This is a slice of American history you don’t want to miss.

In Computers and Stamps, William F. Sharpe provides an upbeat assessment of the impacts of the COVID-19 pandemic on stamp collectors and the stamp hobby. Sharpe observes that “while stamp shows and club meetings were postponed or canceled and walk-in dealers saw much less traffic, internet sales and other online activity related to stamp collecting has increased since March.” He reviews how the United States Postal Service moved from cancellations or postponements to virtual events for its first-day ceremonies for new U.S. stamps. Sharpe also provides highlights from some of the stamp shows that have taken place in recent months, including the Virtual Stamp Show, St. Louis Stamp Expo and Seattle Philatelic Exhibition. Be sure to read to the end of the column to learn more about stamps related to the pandemic and how to see them online.

Determining the country of issue for some stamps can be quite a challenge, particularly if the stamp does not include any Latin letters or other recognizable elements in its design. To make this task easier, Linn’s regularly publishes Stamp Identifier. Each installment provides illustrations of representative stamps and brief summaries of key design features. This week’s Stamp Identifier focuses on Lebanon, which issued its first stamps in 1924. The identifier explains: “Lebanon’s early stamps from 1924 were French issues overprinted ‘Grand Liban.’ Later stamps were inscribed either ‘Grand Liban,’ ‘Republique Libanaise’ or simply ‘Liban,’ with the name also printed in Arabic.” Lebanese postal tax stamps issued during 1956-61 are also discussed in this week’s Stamp Identifier. Consider saving this and future Stamp Identifiers for future reference.