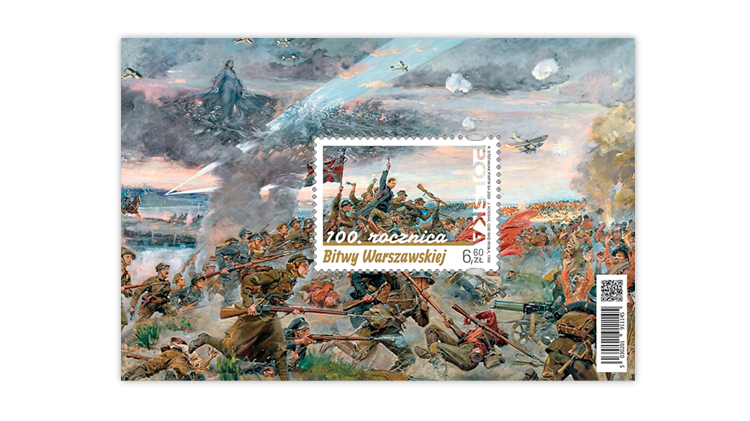 In Stamps of Eastern Europe in the Jan. 25 issue of Linn’s Stamp News, Rick Miller tells the story of the Russo-Polish War by looking at stamps from Poland, Ukraine and the Soviet Union.

The Jan. 25 issue of Linn’s Stamp News just landed on the presses and goes in the mail to subscribers Monday, Jan. 11. And if you subscribe to Linn’s digital edition, you’re at the head of the line with early access Saturday, Jan. 9. While you wait for your issue to arrive in your mailbox, enjoy these three capsule summaries of exclusive content available only to subscribers.

Russo-Polish War of 1918-20 on stamps of three countries

Rick Miller opens his Stamps of Eastern Europe column thus: “The Russo-Polish War of 1919-20, fought just over 100 years ago, left its mark on the stamps of three countries: Poland, Ukraine and the Soviet Union.” The first stamp he discusses in light of the war is 2017 Polish stamp showing Poland’s Marshal Jozef Pilsudski on horseback. It is an imposing image befitting a man who, according to Miller, “came to despise Russian domination of Poland and dedicated himself to winning freedom for a resurrected Poland.” Pisudski’s desires for a new Polish state inevitably came into conflict with the aspirations of Vladimir Ilyich Lenin, the first dictator of the nascent Russian Soviet Federative Socialist Republic. Other personalities who play key roles in the war include Symon Petliura, the nationalist leader who sided with the Poles to take on the Bolsheviks, and Mikhail Nikolayevich Tukhachevsky, the Red Army commander who led the invasion of Poland. The final issue Miller highlights is an impressive souvenir sheet that Poland issued in 2020 to honor the centennial of the Battle of Warsaw.

In First-Day Covers, Lloyd de Vries draws attention to “Mail Outs,” a service offered by the Cancellation Services unit of the U.S. Postal Service that allows FDCs to be mailed directly to people you want to receive them. “The FDCs are submitted to the Postal Service already addressed for individual delivery. Cancellation Services mails them wrapped in clear plastic to prevent other postmarks and dirt from marring your covers,” de Vries explains. De Vries reminds readers that the minimum order is 50 covers. Also, covers “must be submitted by a registered servicer. However it isn’t that hard to find a dealer/servicer willing to add your mail-outs to an order.” De Vries points out that the best place to find information about cachetmakers is in the Directory of Current Cachetmakers published by the American First Day Cover Society. Be sure to read the entire column to get other helpful tips for honoring your special event with a first-day cover.

In each weekly issue of Linn’s, either E. Rawolik VI or E. Rawolik VII dissects the contents of a stamp mixture offered to collectors. E. Rawolik is a pseudonym that is also the word “kiloware” (a stamp mixture) spelled backward. This week, E. Rawolik VII reviews a half sample of 80 worldwide stamps from a dealer in Kansas. A total of 64 of the 80 stamps were valued as the Scott catalog minimum of 25¢. Three stamps in the sample had catalog values great than 80¢, including a used 1975 50-boliviano Simon Bolivar stamp. Rawolik explains that the stamp “was so heavily canceled that I reduced its value by half, which was perhaps still too high.” Rawolik noted a number of popular topical subjects, such as birds, flowers, butterflies and fish. Overall, Rawolik found the stamps in the sample “useful.” Read the entire review for additional insights.