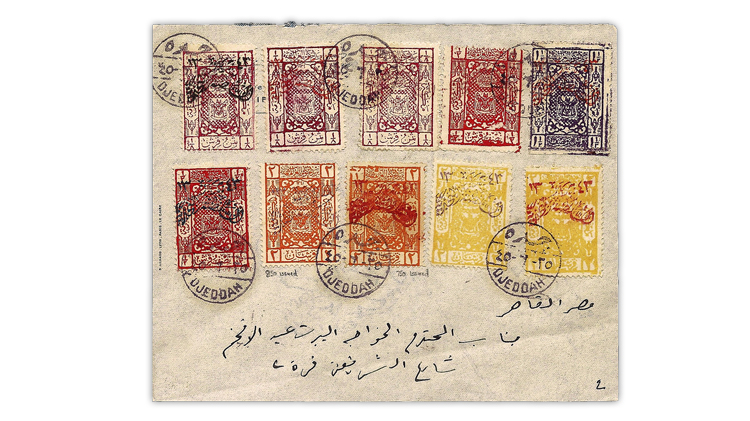 In Middle East Stamps in the June 22 issue of Linn’s Stamp News, a challenge from a Saudi Arabia stamp expert inspires Ghassan Riachi to seek answers to a pair of unresolved questions regarding Saudi Arabia’s first stamps.

The June 22 issue of Linn’s Stamp News just landed on the presses and goes in the mail to subscribers Monday, June 8. And if you subscribe to Linn’s digital edition, you’re at the head of the line with early access Saturday, June 6. While you wait for your issue to arrive your mailbox, enjoy these three glimpses of exclusive content available only to subscribers.

In 2007 Saudi Arabia stamp expert Alexander Kaczmarczyk challenged Middle East Stamps columnist Ghassan Riachi to tackle two questions concerning the first issued stamps of Saudi Arabia: Were they issued at the same time or separately, and which one of the stamps was issued first? “The story of the stamps starts in the second half of 1924, when the two Arabian Peninsula states of the Kingdom of Hejaz and the Sultanate of Nejd were at war with each other,” Riachi explains. From there Riachi takes the reader on a stimulating journey of discovery. Read the column to see if he was able to answer Kaczmarczyk’s questions.

In Stamps of Eastern Europe, Rick Miller pulls the curtain back on the philatelic histories of Slovena and Slovakia. Although both countries are very different, Miller observes that “many people, including nonspecialist stamp collectors and dealers, often confuse them with each other because of the similarity of their names.” Miller also notes that there are similarities between the two nations, including use of the Latin alphabet and their geographic location. He uses numerous colorful stamps to pinpoint pivotal moments and people in the history of each country. One Slovakian stamp pictures one of the six United States Marines who raised the second U.S. flag on Mount Suribachi during the 1945 Battle of Iwo Jima. You’ll have to read to the end to learn who he is.

In each weekly issue of Linn’s, either E. Rawolik VI or E. Rawolik VII dissects the contents of a stamp mixture offered to collectors. E. Rawolik is a pseudonym that is also the word “kiloware” (a stamp mixture) spelled backward. This week, E. Rawolik VII sorts through a sample from a worldwide assortment that yielded stamps from 16 different countries. “The issue dates ranged from 1910 to 2014, with an average issue date of about 1970,” Rawolik writes. The highest Scott catalog value, $5.25, was for a Belgian souvenir sheet issued in 2008. Overall, Rawolik found the stamps in the sample to be “worthwhile” and “from good countries.” Be sure to enjoy the entire review in this issue.