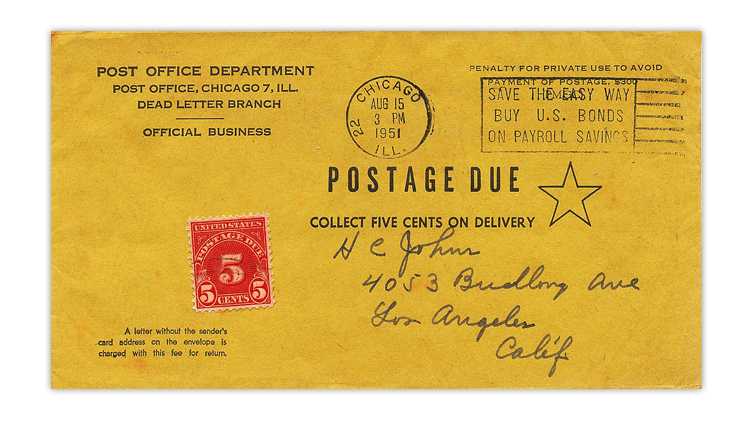 Modern U.S. Mail columnist Tony Wawrukiewicz takes a look at the postal history of Dead Letter Branch returns. After years of research and exhibiting, one particular use still eludes him.

The Aug. 12 issue of Linn’s Stamp News just landed on the presses and goes in the mail to subscribers Monday, July 29. And if you subscribe to Linn’s digital edition, you’re at the head of the line with early access Saturday, July 27. Check out these three must-read stories.

In this month’s installment of Modern U.S. Mail, Tony Wawrukiewicz points out that minor-value letters were returned from Dead Letter Branch offices in an envelope bearing a geometric symbol such as a star. Rather more mysterious are the indicators used on Dead Letter Branch envelopes used to return valuable letters containing money. Have you seen such an example? If so, Wawrukiewicz wants to hear from you.

A censored World War II cover sent from Las Cruces, N.M., to stamp dealer Ezra D. Cole in New Jersey piqued Wayne Youngblood’s curiosity when he acquired it a few years. As he recounts in The Odd Lot, a “chance discovery” revealed an intriguing connection between the cover and the top secret Manhattan Project in Los Alamos, N.M. Be sure to read the entire column.

In each weekly issue of Linn’s, either E. Rawolik VI or E. Rawolik VII dissects the contents of a stamp mixture offered to collectors. E. Rawolik is a pseudonym that is also the word “kiloware” (a stamp mixture) spelled backward. This week, E. Rawolik VI reviews a sample of 50 stamps from a larger worldwide assortment. Enjoy the full review in this issue.

A tour of groundbreaking stamps: Inside Linn’s