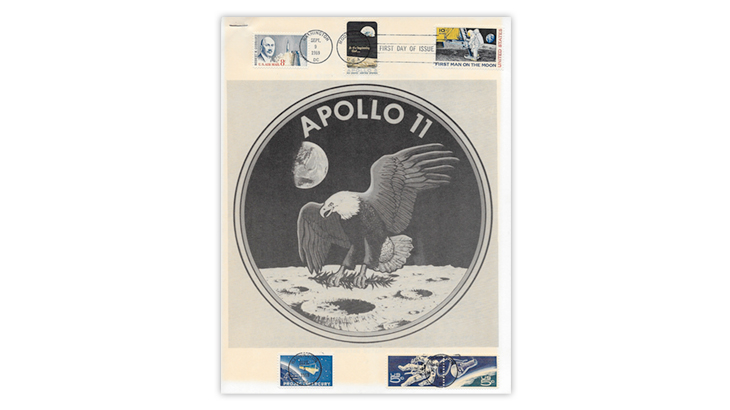 In his First-Day Covers column, Lloyd de Vries features this unusual FDC dedicated to the 1969 landing of Apollo 11 on the moon. The owner has spent the past 50 years creating the cover from a promotional publication produced by the Goddard Space Flight C

The Nov. 25 issue of Linn’s Stamp News just landed on the presses and goes in the mail to subscribers Monday, Nov. 11. And if you subscribe to Linn’s digital edition, you’re at the head of the line with early access Saturday, Nov. 9. Here we tempt you with three glimpses of exclusive content available only to subscribers.

The creation of a marvelous first-day cover from a 1969 press kit brochure is the focus of First-Day Covers columnist Lloyd de Vries. Beginning in 1969, when Apollo 11 landed astronauts Neil Armstrong and Edwin “Buzz” Aldrin on the moon, the owner of the cover began adding space-themed stamps that were struck with first-day postmarks. Following the addition of the two 2019 Moon Landing Anniversary stamps, the FDC now bears first-day cancels from 1969, 1994 and 2019.

The passing of Hrodna among five countries

During the 20th century, Hrodna, a city in western Belarus, was passed among imperial Russia, Lithuania, Poland and the Soviet Union. Rick Miller, in Stamps of Eastern Europe, uses stamps and postal history to document Hrodna’s development while under the sequential control of this quintet of nations. Today, Hrodna’s economy relies on tourism, and the city is one of few locales in Belarus that foreigners can visit without a visa.

In each weekly issue of Linn’s, either E. Rawolik VI or E. Rawolik VII dissects the contents of a stamp mixture offered to collectors. E. Rawolik is a pseudonym that is also the word “kiloware” (a stamp mixture) spelled backward. This week, E. Rawolik VII finds a number of pleasant surprises while sifting through a sample culled from a 1-pound assortment of Japanese stamps.