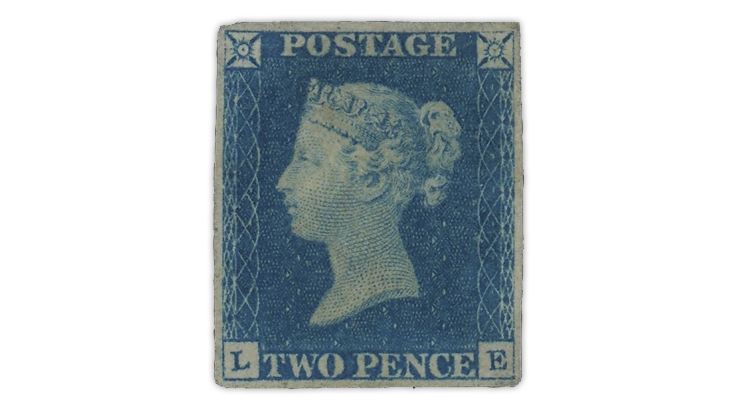 If you’re a fan of Great Britain’s Penny Black, the world’s first adhesive postage stamp, you might also like the Two-Penny Blue. Matthew Healey takes a close look at this attractive stamp in Great Britain Philately in the Sept. 20 monthly issue of Linn’s

The Sept. 20 monthly issue of Linn’s Stamp News just landed on the presses and goes in the mail to subscribers Monday, Sept. 6. And if you subscribe to Linn’s digital edition, you’re at the head of the line with early access Saturday, Sept. 4. While you wait for your issue to arrive in your mailbox, enjoy these three quick glimpses of exclusive content available only to subscribers.

“Earlier this year, I devoted two Great Britain Philately columns to exploring the Penny Reds, the simple but fascinating workhorse stamps that franked the lion’s share of Britain’s domestic mail from 1841 to 1880. This month, I will carry on with the stamp that faithfully accompanied the Penny Red and its predecessor, the Penny Black, through philately’s first four decades: the Two-Penny Blue,” writes Great Britain Philately columnist Matthew Healey. If you enjoyed those previous columns on the Penny Reds, be sure to set aside some time for Healey’s take on the Two-Penny Blue. He provides numerous tips, verbal and visual, for identifying the various printings and collecting the associated postal history.

In Spotlight on Philately, Ken Lawrence brings readers up to date on his 15 years of researching the counterfeits of our nation’s earliest postal cards. Using numerous philatelic sources and contemporaneous newspaper accounts, Lawrence pieces together how the counterfeits were produced and introduces readers to a pair of resourceful individuals who printed and sold them to unsuspecting businesses across the country. There much more to tell, of course, and Lawrence does not disappoint. Be sure to read the whole column, and keep an eye out for part 2, which is scheduled to run in the Oct. 18 monthly issue of Linn’s.

Christer Brunström, in Nordic Stamp Scene, showcases a number of prominent stamp subjects who make an appearance in the Norwegian television series titled Atlantic Crossing. “The series deals with the events of World War II in Norway, Britain and the United States, with particular emphasis on the roles played by Norwegian Crown Princess Martha and United States President Franklin D. Roosevelt,” Brunström explains. Crown Princess of Norway visited the United States in 1939, an event dramatized in an episode of Atlantic Crossing. The princess was honored on two Norwegian semipostal stamps issued in 1956. Dig into the reset of the column to learn about Roosevelt’s appearance in the show.