Inside Linn’s: Son created Genesis Graphics covers as tribute to his father 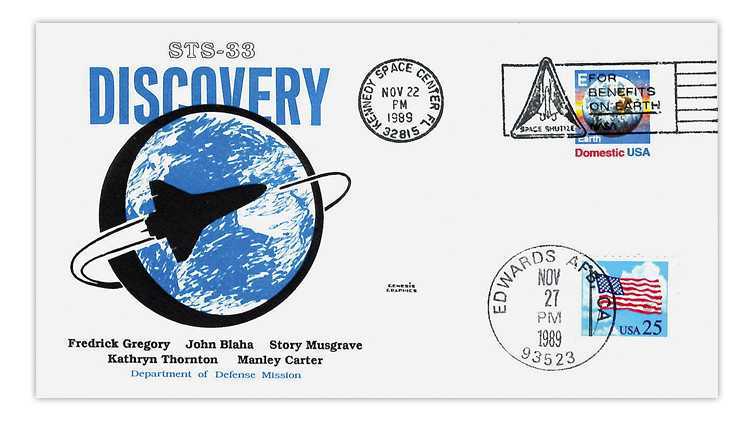 The Jan. 30 issue of Linn’s Stamp News just landed on the presses and goes in the mail to subscribers Monday, Jan. 16. And if you subscribe to Linn’s digital edition, you’re at the head of the line with early access Saturday, Jan. 14. While you wait for your issue to arrive in your mailbox, enjoy these three quick glimpses of exclusive content available only to subscribers.

Genesis Graphics covers: a tribute from son to father

The explosion of the space shuttle Challenger on Jan. 28, 1986, spurred Jon Cartier into action. As the son of respected astrophilatelist Ray Cartier, Jon “had an interest in space from a young age, given his genetic inheritance,” writes Charles J. Vukotich Jr. in Exploring Astrophilately. “He decided that he wanted to do something to honor Challenger once the shuttle program resumed. As he was a professional graphic artist, a series of flight covers was logical.” The series came to be called Genesis Graphics, and Vukotich illustrates 10 of the covers in his column. “The cachets (decorative designs) are done in two or three colors, with some featuring hand coloring,” he explains. “Each cover comes with an informational card detailing the mission.” The visual feast in Vukotich’s column is one you won’t want to miss.

In Tip of the Week, Stamp Market Tips columnists Henry Gitner and Rick Miller return to a U.S. stamp they tipped in 2017 and 2021: the 1851 3¢ orange brown George Washington type I stamp (Scott 10). “The type I stamp is the most often misidentified stamp in U.S. classics collecting,” Gitner and Miller write. “In the thousands of U.S. collections we have examined over the years, the stamp purporting to be Scott 10 is almost always a more common and less valuable George Washington 3¢ dull red stamp, either Scott 11 or 11A.” Because of the tight spacing between stamps when they were printed, four-margin examples are quite difficult to find.

In each weekly issue of Linn’s, either E. Rawolik VI or E. Rawolik VII dissects the contents of a stamp mixture offered to collectors. E. Rawolik is a pseudonym that is also the word “kiloware” (a stamp mixture) spelled backward. This week, E. Rawolik VI looks over a sample of 49 stamps selected at random from a mixture of 209 worldwide stamps from Blackbird’s Nest, a dealer in Washington state. A total of 37 countries were represented in the sample, and the years of issue ranged from 1895 to 1999. The most recent stamp was from Norway and pictures a paper clip. The oldest stamp, a 75-real King Carlos from Portugal, also had the highest Scott catalog value, at $4. Enjoy the full review in this issue.