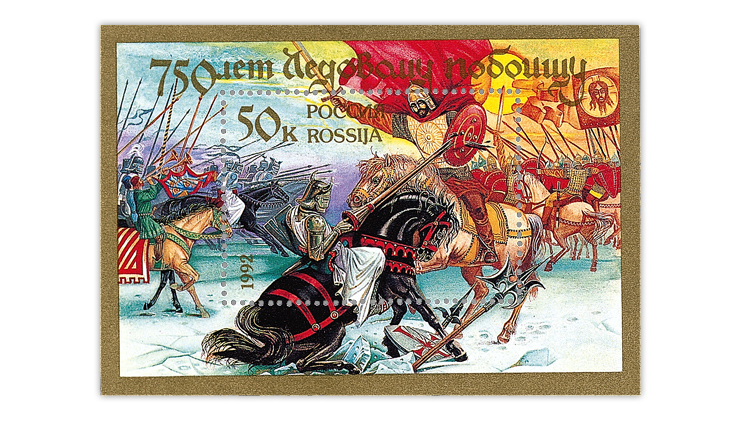 In Stamps of Eastern Europe in the June 28 issue of Linn’s Stamp News, Rick Miller takes readers on a philatelic guided tour of the film industry in the Soviet Union. This Russian 1992 souvenir sheet serves as an interesting connection between Prince Alex

The June 28 issue of Linn’s Stamp News just landed on the presses and goes in the mail to subscribers Monday, June 14. And if you subscribe to Linn’s digital edition, you’re at the head of the line with early access Saturday, June 12. While you wait for your issue to arrive in your mailbox, enjoy these three brief summaries of exclusive content available only to subscribers.

In Stamps of Eastern Europe, Rick Miller pulls the curtain back on the film industry during the days of the Soviet Union. “The Soviet Union produced a thriving, if tightly censored, film industry for a largely captive audience. Soviet cinema is remembered and commemorated on many postage stamps,” writes Miller in setting the stage for his fascinating review. The 1925 film Battleship Potemkin looms large in the column. It is the second feature-length film by director Sergei Eisenstein (1898-1948), and Miller states that it is “no doubt the most influential and best-known Soviet film.” He compares the film to D.W. Griffith’s 1915 film The Birth of a Nation in terms of stylistic and technical importance. Miller reviews Eisenstein’s career, with an emphasis on a technique called film montage that Eisenstein used to great effect. The pictured souvenir sheet has an interesting connection to Eisenstein’s 1938 masterpiece Alexander Nevsky. Miller has all the details in this fascinating column.

In early 1981, shortly following its second five-year plan (1975-80), Saudi Arabia issued stamps and souvenir sheets “to commemorate the telecommunications achievements of the Ministry of Posts, Telegraphs and Telephones,” writes Ghassan Riachi in Middle East Stamps. The plan focused its efforts on improved telephonic communications, intercommunication networks, satellite networks and electronic Telex lines. “The philatelic issue celebrating these achievements (Scott 808-813) consists of three multicolored stamps denominated 20 halalas, 80h and 115h, respectively, and three different multicolored souvenir sheets, each with a face value of 100h,” Riachi explains. He provides additional production details for the issue before highlighting the various technological advancements pictured on the stamps and souvenir sheets. Riachi concludes with some useful pointers on how to collect the issue (both stamps and associated postal history) and notes that this set is “popular among collectors in the Middle East, as well as among topical collectors.”

In each weekly issue of Linn’s, either E. Rawolik VI or E. Rawolik VII dissects the contents of a stamp mixture offered to collectors. E. Rawolik is a pseudonym that is also the word “kiloware” (a stamp mixture) spelled backward. This week, E. Rawolik VI takes a close look at a 53-stamp sample from an assortment of stamps from island nations. In this case the reviewed stamps came from just four nations: Bahamas, with four stamps; Bermuda, with seven; Cyprus, with 26; and Iceland, with 16. A 2018 stamp from Iceland picturing a calf was the most recent issue. This stamp also was the highest-valued stamp in the sample, with a Scott catalog value of $3.50. One of the stamps turned out to be unused: a 1955 2-millieme Queen Elizabeth II from Cyprus. Overall, Rawolik found the stamps “interesting and enjoyable to peruse.” Enjoy the rest of the review in this week’s issue.