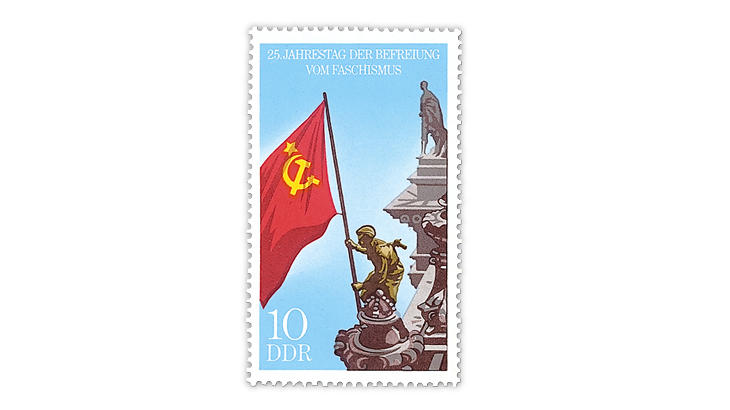 This 1970 10-pfennig stamp from the German Democratic Republic shows a Red Army soldier raising a Soviet flag over the Reichstag in Berlin. Rick Miller explains the symbolism of the design in his Stamps of Eastern Europe column in the Oct. 28 issue of Lin

The Oct. 28 issue of Linn’s Stamp News just landed on the presses and goes in the mail to subscribers Monday, Oct. 14. And if you subscribe to Linn’s digital edition, you’re at the head of the line with early access Saturday, Oct. 12. Here are three brief glimpses of exclusive content available only to subscribers.

In Stamps of Eastern Europe, Rick Miller takes a tour of the various occupation stamps that Soviet authorities issued following the establishment of the Soviet Occupation Zone in Germany in August 1945. The stamps issued for six provinces, along with stamps valid for use throughout the occupation zone, preceded the stamps of the German Democratic Republic, which came into existence when the occupation ended on Oct. 7, 1949.

A short-lived handstamp used in Medina

Ghassan Riachi, in Middle East Stamps, traces the fascinating history behind the Medina handstamp, a postal marking that was used by the Nejdis to show postage paid on letters sent from the post office in late 1925 and early 1926. Covers bearing the Medina handstamp are quite scarce, and examples that turn up at auction attract spirited bidding from collectors and dealers. Despite this, the marking is not listed in any stamp catalog, which makes Riachi’s column essential reading.

In each weekly issue of Linn’s, either E. Rawolik VI or E. Rawolik VII dissects the contents of a stamp mixture offered to collectors. E. Rawolik is a pseudonym that is also the word “kiloware” (a stamp mixture) spelled backward. This week, E. Rawolik VI sifts through a sample of stamps taken from a 5-ounce worldwide assortment that the seller affectionately calls the “hay bale.” Among the pleasant surprises are two 2011 Burundi souvenir sheets valued at $12 and $15.