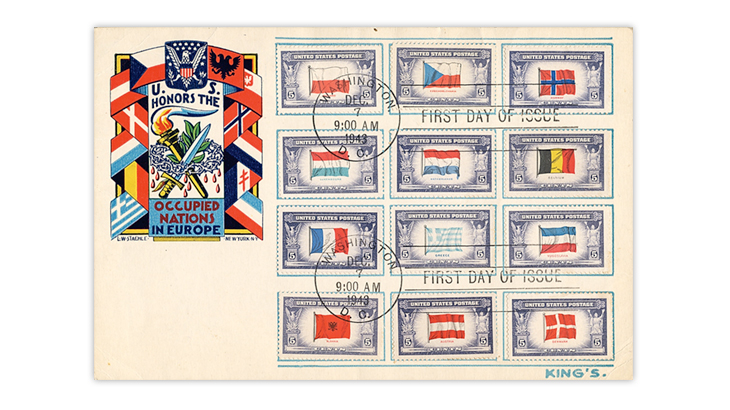 In First-Day Covers in the Nov. 30 issue of Linn’s Stamp News, Lloyd de Vries discusses how first-day cover collecting has benefited from a wave of growth in the stamp hobby during the COVID-19 pandemic.

The Nov. 30 issue of Linn’s Stamp News just landed on the presses and goes in the mail to subscribers Monday, Nov. 16. And if you subscribe to Linn’s digital edition, you’re at the head of the line with early access Saturday, Nov. 14. While you wait for your issue to arrive in your mailbox, enjoy these three brief reviews of exclusive content available only to subscribers.

First-Day Covers columnist Lloyd de Vries offers an upbeat assessment of the impact the COVID-19 pandemic is having on the stamp hobby, including the collecting of FDCs. “The reasons for this growing interest in the stamp hobby are not entirely clear, but many people appear to be taking out their old collections, or discovering a collection that once belonged to a relative,” de Vries writes. He also notes that the pandemic has given collectors more time to “dive into their FDCs and rediscover treasures they already own.” To make his point, de Vries reviews four eye-catching FDCs from his own collection. Leading off the display is an oversize FDC for the first 12 United States 1943 Overrun Countries stamps. The cover features a colorful cachet by L.W. Staehle, who produced a variety of cachets for multiple FDC servicers during the 1940s. The other three covers feature cachets by Harry Ioor and Carol Gordon. This column is a feast for the eyes that you won’t want to miss.

In their Tip of the Week, Stamp Market Tips columnists Henry Gitner and Rick Miller observe that numerous collectors are focusing on acquiring back-of-the-book issues for their collections. In light of this, they suggest going on the hunt for the United States 1956 $1 scarlet Numeral postage due stamp (Scott J87), which they last tipped in the Stamp Market Tips column in the April 15, 2019, issue of Linn’s. Gitner and Miller point out that the stamp’s “period of usage was relatively short” because it was replaced in 1959 by a $1 postage due stamp featuring a black numeral of value (J100). Our tipsters also note that the 1956 $1 postage due can be a challenge to locate in mint never-hinged condition. Read the entire tip to learn what you might expect to pay to add this stamp to your collection.

In each weekly issue of Linn’s, either E. Rawolik VI or E. Rawolik VII dissects the contents of a stamp mixture offered to collectors. E. Rawolik is a pseudonym that is also the word “kiloware” (a stamp mixture) spelled backward. This week, E. Rawolik VII sifts through a sample of stamps from a worldwide assortment from a seller in Maryland. The mix was advertised as containing what Rawolik calls “dollar-and-up” stamps, meaning stamps with a Scott catalog value of $1 or more. Of the 46 stamps in the sample, just seven stamps failed to meet the $1 catalog value threshold. Overall a 1968 airmail stamp from Saudi Arabia picturing a falcon came in with the highest catalog value, $16, while an average stamp in the sample was valued at $3.86. Rawolik was pleased to find “many older stamps to fill empty spots” in his stamp album.