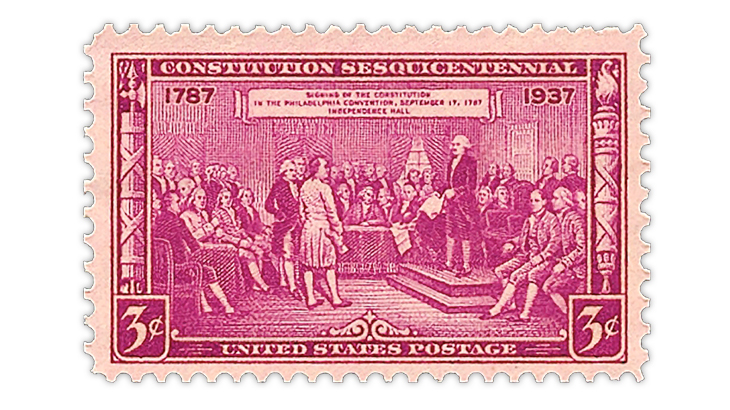 In an entertaining feature in the Aug. 30 issue of Linn’s Stamp News, Lawrence F. Skalak III explores some of the many colorful United States stamps that were issued during the bicentennial celebration era from 1975 to 1991.

The Aug. 30 issue of Linn’s Stamp News just landed on the presses and goes in the mail to subscribers Monday, Aug. 16. And if you subscribe to Linn’s digital edition, you’re at the head of the line with early access Saturday, Aug. 14. While you wait for your issue to arrive in your mailbox, enjoy these three quick glimpses of exclusive content available only to subscribers.

Stamps show the evolution of the U.S. Constitution

The Bicentennial celebration on postage stamps in the United States lasted from 1975 to 1991. During that time, the U.S. Postal Service issued a number of attractive stamps in honor of key individuals and events that impacted the birth and development of the U.S. Constitution. Lawrence F. Skalak III introduces readers to some of these issues and provides an illuminating review of the historic period that the stamps celebrate. If you have a passion for early U.S. history, be sure to set aside some time to read Skalak’s engaging feature article.

In a special report, Tony Dewey alerts readers to the first example of a United States 1978 nondenominated “A” (15¢) stamp that was rejected for use as postage on a cover sent to an international destination. Amazingly enough, the cover was recently discovered, roughly 43 years after the A-rate stamps were issued. The cover originated in Sacramento, Calif., and was destined for Quito, Ecuador. The cover apparently was never remailed and eventually surfaced in England, according to a report from a collector. Dewey also provides a quick review of the relevant Postal Service regulations that affected the cover’s status at the time it was mailed. His account of this piece of modern postal history is well worth your time.

In each weekly issue of Linn’s, either E. Rawolik VI or E. Rawolik VII dissects the contents of a stamp mixture offered to collectors. E. Rawolik is a pseudonym that is also the word “kiloware” (a stamp mixture) spelled backward. This week, E. Rawolik VII sifts through three-fourths of an assortment of used commemorative stamps from 11 stamp-issuing entities. Of the 33 stamps under review, 12 came from Australia. Overall, the stamps came in with a total Scott catalog value of $90.35. The highest catalog value in the sample, $24, was for an Australian stamp. Rawolik has the details near the end of the column.