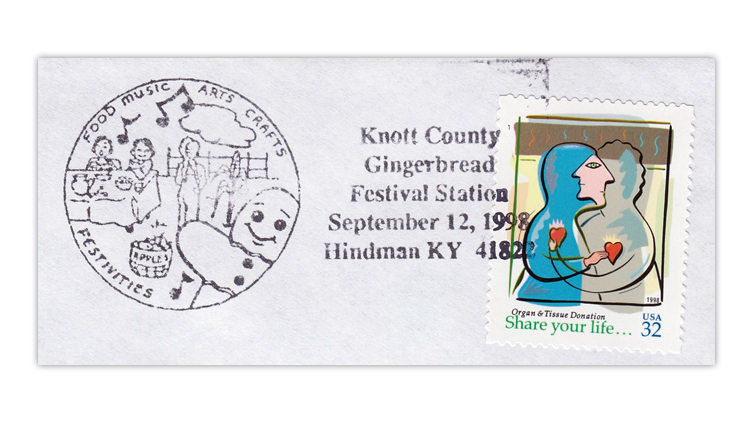 The gingerbread man on this 1998 Hindman, Ky., pictorial postmark is smiling, but his grin conceals a rather checkered political past. Wayne Youngblood explains in The Odd Lot in the Dec. 13 issue of Linn’s Stamp News.

The Dec. 13 issue of Linn’s Stamp News just landed on the presses and goes in the mail to subscribers Monday, Nov. 29. And if you subscribe to Linn’s digital edition, you’re at the head of the line with early access Saturday, Nov. 27. While you wait for your issue to arrive in your mailbox, enjoy these three quick glimpses of exclusive content available only to subscribers.

When it comes to Kentucky politics, the expression “buying gingerbread” isn’t just about eating a tasty treat. As Wayne Youngblood explains in The Odd Lot, the term “has long been a euphemism in that state for buying votes — a practice that, at least in Knott County, near the state’s eastern border, is literal and dates back well into the 19th century.” Youngblood traces the history of this questionable practice from its murky beginnings to the present day. He also provides a brief profile of Ruby Watts (1905-92), a career local politician who unabashedly bought gingerbread to curry favor with voters. All of which raises a question: Why was gingerbread used to buy votes instead of some other baked good? You’ll have to read the column to learn the answer.

In Modern U.S. Mail, Tony Wawrukiewicz takes a closer look at postal rates for forwarded drop letters for carrier and non-carrier post offices during the brief war-tax period from Nov. 2, 1917, to June 30, 1919. During this brief window of time, “drop-letter forwarding from both carrier and noncarrier post offices required the payment of 1¢ for the forwarding,” Wawrukiewicz writes. He then highlights an unusual April 1919 war-tax period local letter that was first mailed within Stockton, Calif., as a 1-ounce local letter at the 2¢ carrier war rate. The letter was then forwarded to Berkeley, Calif., with 1¢ postage due for forwarding because the intracity rate was 3¢ during the war-tax period. Berkeley was a carrier post office and thus affixed a 1¢ postage due stamp. As it turned out, the 1¢ postage due was never collected. Wawrukiewicz explains why at the end of his column.

In each weekly issue of Linn’s, either E. Rawolik VI or E. Rawolik VII dissects the contents of a stamp mixture offered to collectors. E. Rawolik is a pseudonym that is also the word “kiloware” (a stamp mixture) spelled backward. This week, E. Rawolik VII takes on a packet of worldwide stamps issued primarily before 1980. The seller’s ad stated there would be 200 stamps, but Rawolik received 227, from which a one-third sample of 76 stamps was selected for review. A total of 58 stamp-issuing entities were represented. “This was a good packet,” Rawolik concludes. “There were more than the advertised number of stamps, the stamps were as old as claimed, the value was good for 2¢ stamps (almost 50¢ each), the stamps were widely distributed over many countries, and there were several interesting stamps.” Enjoy the full review in this issue.