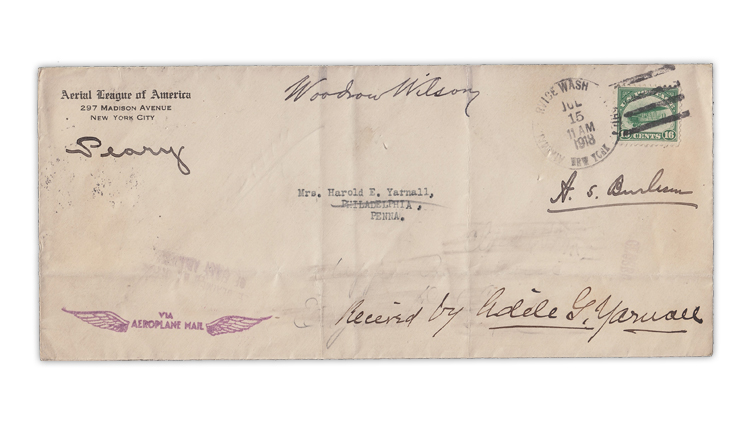 This July 15, 1918, first-flight cover of the United States 1918 16¢ airmail stamp appears to show autographs of three important people, including President Woodrow Wilson. Are the signatures genuine? Wayne Youngblood has the answer in The Odd Lot.

The Aug. 9 issue of Linn’s Stamp News just landed on the presses and goes in the mail to subscribers Monday, July 26. And if you subscribe to Linn’s digital edition, you’re at the head of the line with early access Saturday, July 24. While you wait for your issue to arrive in your mailbox, enjoy these three quick glimpses of exclusive content available only to subscribers.

Things aren’t as they seem on 1918 Woodhouse cover

The Aerial League of America was founded in 1917 under the auspices of the Aero Club of America. The league’s corner card appears on the cover illustrated here. Henry Woodhouse was an early member of the Aero Club of America. He was also considered an expert in the early development of aviation. But as Wayne Youngblood writes in The Odd Lot, “There were also more sinister roots and more than a little hucksterism behind this multifaceted individual.” Among other things, Woodhouse was an accomplished forger. “One of his trademark moves was to enhance relatively common documents with a forged rare signature,” Youngblood explains. And that’s why the cover shown here takes on added significance. Read the column to learn about Woodhouse’s connection to the cover and the three autographs that appear on it.

Postcards and postal cards are fun and, at times, challenging to collect and provide “a wonderful source of almost innumerable postal uses,” writes Tony Wawrukiewicz in Modern U.S. Mail. To make his point, Wawrukiewicz illustrates and discusses two significant and uncommon card uses that were mailed in 1943 and 1966. Both were assessed postage due for different reasons that are related to rather complex rules and regulations that governed postcards and postal cards. Why were the rules so complicated? Wawrukiewicz provides the answer in his column, along with detailed explanations for the postage due frankings on the two cards he pictures.

In each weekly issue of Linn’s, either E. Rawolik VI or E. Rawolik VII dissects the contents of a stamp mixture offered to collectors. E. Rawolik is a pseudonym that is also the word “kiloware” (a stamp mixture) spelled backward. This week, E. Rawolik VII takes on a sample of stamps from a worldwide mixture offered by a dealer who goes by the moniker Blackbird’s Nest. The sample served up stamps from 24 countries, with the most recent stamp being issued by Brazil in 1993. The oldest issue was a 1907 Sower definitive from France. Most of the stamps were valued at the Scott catalog minimum of 25¢. A couple were valued at $3, the highest value in the reviewed sample. Dig into the column to learn their subjects and which countries issued them.