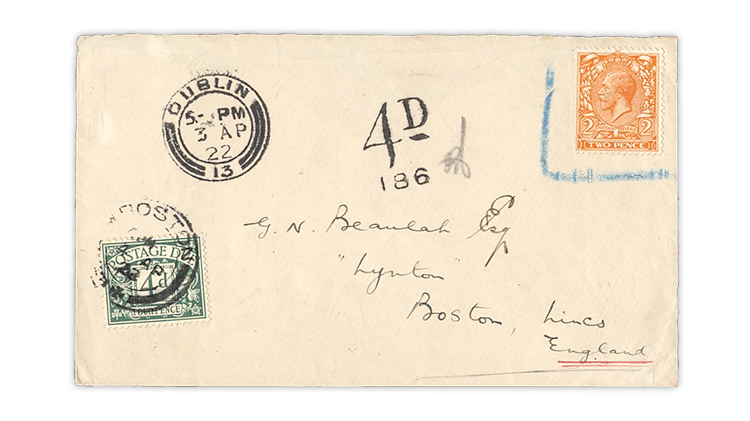 In Great Britain Philately in the April 19 monthly issue of Linn’s Stamp News, Matthew Healey examines how Ireland, the Channel Islands and the Isle of Man negotiated the switch from using British stamps to their own stamps during the 20th century.

The April 19 monthly issue of Linn’s Stamp News just landed on the presses and goes in the mail to subscribers Monday, April 5. And if you subscribe to Linn’s digital edition, you’re at the head of the line with early access Saturday, April 3. While you wait for your issue to arrive in your mailbox, enjoy these three brief summaries of exclusive content available only to subscribers.

How were postal operations handled in Ireland, the Channel Islands and the Isle of Man after they stopped using British stamps and began using their own issues? Matthew Healey provides a detailed answer to this question in this month’s installment of Great Britain Philately. Healey illustrates a diverse array of 10 covers to show how uncertainties during the transition period affected how mail was handled. For example the cover illustrated here was sent in 1922 from Dublin, Ireland, to Boston, England. The postmark date, April 3, marked the first day British stamps were invalid in Ireland unless they bore Irish overprints. Therefore the 2-penny King George V stamp was ignored, and the recipient had to pay double, or 4d, postage due. Healey observes that this cover “is a fairly straightforward example of how a letter with expired stamps was treated as unpaid. But things could get a little trickier.” How much trickier? Read the column to find out.

Ken Lawrence, in Spotlight on Philately, brings sharp investigative skills to bear in his examination of the Oct. 23, 1962, first-day covers of the United States 4¢ Dag Hammarskjold invert stamps. Many collectors are familiar with the U.S. Post Office Department’s controversial decision to intentionally print millions of additional Hammarskjold stamps with the yellow inverted not long after the error was first discovered in Ohio. Lawrence fills in the details, including a careful documentation of the original Hammarskjold inverted-yellow error stamps and a review of Postmaster General J. Edward Day’s order to intentionally reprint more stamps with the yellow inverted. The heart of Lawrence’s discussion focuses on the various first-day covers of the Hammarskjold invert. He regards as genuine covers postmarked Oct. 27 at Mentmore, N.M., and Nov. 14 at Cuyahoga Falls, Ohio. As for what Lawrence calls “spurious contenders,” you’ll have to read his entire report to discover which ones don’t make the cut.

Philately of France columnist Larry Rosenblum offers an appreciation of France’s award-winning series of attractive souvenir sheets titled Great Moments in French History (Les Grandes Heures de l’Histoire de France). Rosenblum sets the stage with a brief review of the process of engraving, also called recess-printing or intaglio. Engraved stamps are uncommon in most countries today because of the cost. But as Rosenblum explains, “France remains a notable exception. Engraving of the dies for stamps is still done by hand. Most definitives are engraved and recess-printed, and many commemoratives are partly or completely engraved.” The Great Moments in French History series began in 2012. One sheet of two stamps with an illustrated background has been issued each year since. On this guided tour, Rosenblum looks at the sheets based on the chronological order of the notable events that are pictured instead of in the order in which they were issued. The people and events showcased on the sheets that Rosenblum highlights span some 1,200 years, from St. Genevieve, the patron saint of Paris who lived during the early fifth century, to the 1659 Treaty of the Pyrenees. This is a philatelic tour of French history you won’t want to miss.