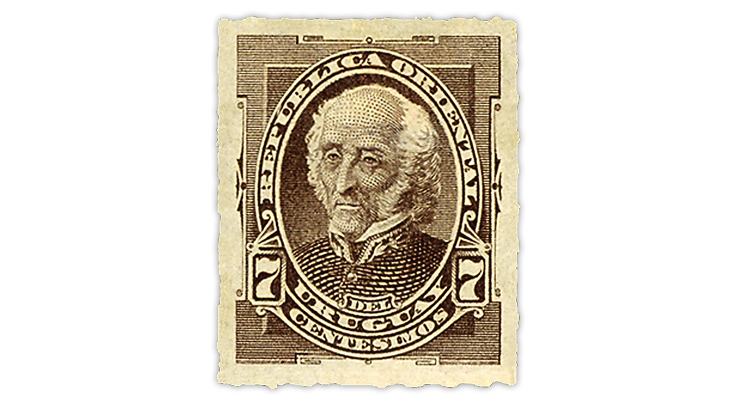 The June 1 issue of Linn’s Stamp News just landed on the presses and goes in the mail to subscribers Monday, May 18. And if you subscribe to Linn’s digital edition, you’re at the head of the line with early access Saturday, May 16. While you wait for your issue to arrive your mailbox, enjoy these three glimpses of exclusive content available only to subscribers.

“Two stamps stand out in Uruguay’s 1884 series. The 7-centavo and the 10c denominations are the only ones in the series that depict people,” writes Thomas P. Myers in Stamps of Latin America. Shown on the 7c stamp is Jose Gervasio Artigas Arnal (1764-1850), who is widely celebrated as a national hero. Myers notes that Artigas is regarded by some as “the father of Uruguayan nationhood.” Maximo Benito Santos Barbosa was president of Uruguay when the 10c stamp picturing him was issued. Santos served as president from 1882 to 1886. Read the whole column to learn more about this pair of fascinating leaders.

$2 Statue of Freedom pays postage due on face mask shipment

The coronavirus COVID-19 pandemic has significantly affected the transport and delivery of mail. But as Charles Snee explains in Dollar-Sign Stamps, there are now opportunities to seek “dollar-sign postal history with connections to these most unusual times.” One such item, a large envelope containing a shipment of face masks, recently came Snee’s way. A mistake on the part of the sender necessitated payment of postage due, most of which was satisfied with a 2018 $2 Statue of Freedom stamp. Snee also points out an easily missed but desirable feature of the original franking. Check out the column to discover what it is.

Kitchen Table Philately: Worldwide mix gets a B- grade

In each weekly issue of Linn’s, either E. Rawolik VI or E. Rawolik VII dissects the contents of a stamp mixture offered to collectors. E. Rawolik is a pseudonym that is also the word “kiloware” (a stamp mixture) spelled backward. This week, E. Rawolik VII peruses an assortment of stamps from 20 different countries that the seller described in his advertisement as a “philatelic crap shoot.” Based on his examination of half of the mix, Rawolik assigned a grade of B- based on the overall age, condition and catalog value of the stamps.