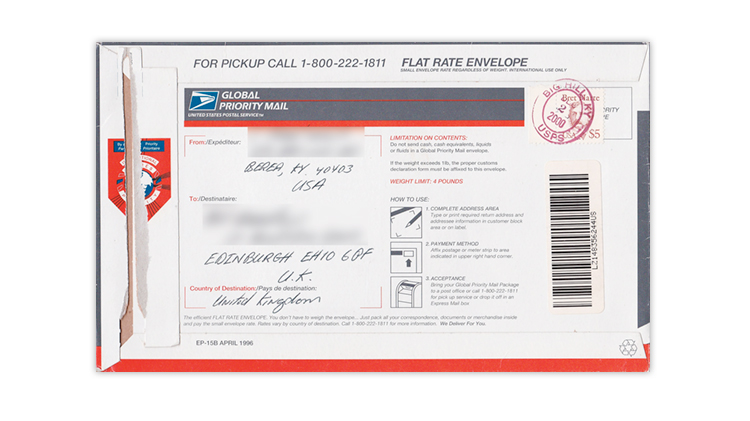 In Modern U.S. Mail in the Nov. 9 issue of Linn’s Stamp News, Tony Wawrukwicz reports that international rates and fees for 1996 to 2014 have been updated online. This Global Priority Mail envelope mailed in 2000 required $5 postage, which was satisfied b

The Nov. 9 issue of Linn’s Stamp News just landed on the presses and goes in the mail to subscribers Monday, Oct. 26. And if you subscribe to Linn’s digital edition, you’re at the head of the line with early access Saturday, Oct. 24. While you wait for your issue to arrive in your mailbox, enjoy these three brief reviews of exclusive content available only to subscribers.

International rates and fees for 1996 to 2014 updated online

Collectors of modern United States postal history will find some good news from Tony Wawrukiewicz in his Modern U.S. Mail column: “All the U.S. international rates and fees for the 1996 to 2014 period are updated and available as downloadable PDFs from the digitized U.S. Postal Bulletins website at www.uspostalbulletins.com.” Wawrukiewicz notes that these rates and fees “are also found online in the 1995 to 2019 U.S. Postal Service Notice 123 files.” To provide some context, Wawrukiewicz highlights a Global Priority Mail envelope that was mailed Dec. 2, 2000, from Kentucky to Great Britain. At that time the rate for such a mailing was $5, which was satisfied by a single $5 Bret Harte definitive stamp (Scott 2196) from the Great Americans series.

Wayne L. Youngblood, in The Odd Lot, digs into the fascinating history behind an unusual label that has “caused collectors considerable consternation over the years.” Youngblood explains that the label looks like the 1840 British Penny Black stamp featuring a portrait of Queen Victoria. “The vignette (central image) features a winged head of Mercury (imagined as a female in this version) in place of the queen that is set against a black background with intricate scrollwork on either side,” Youngblood writes. “Ocean” appears in the top tablet of the label, and the bottom tablet reads “Postage.” To add to the mystery, the label bears no denomination or country of origin. Youngblood goes on to reveal the connection between the label and the Ocean Penny Postage movement of the 1850s. Read the column to learn who produced the ornate envelopes that are the source of the Ocean Postage labels.

In each weekly issue of Linn’s, either E. Rawolik VI or E. Rawolik VII dissects the contents of a stamp mixture offered to collectors. E. Rawolik is a pseudonym that is also the word “kiloware” (a stamp mixture) spelled backward. This week, E. Rawolik VII sings the praises of a worldwide mixture of 200 worldwide stamps for $10. The reviewed sample of 69 stamps included issues from 26 countries. Greece led the way, with 13 stamps. Nine stamps had a Scott catalog value of $1 or more. Overall, Rawolik provides a positive summary of this mix: “The stamps were all foreign, the count was correct, practically all the stamps were commemoratives, the value was as expected, and I found several interesting stamps.” Read the review to learn which country served up the stamp with the highest catalog value.