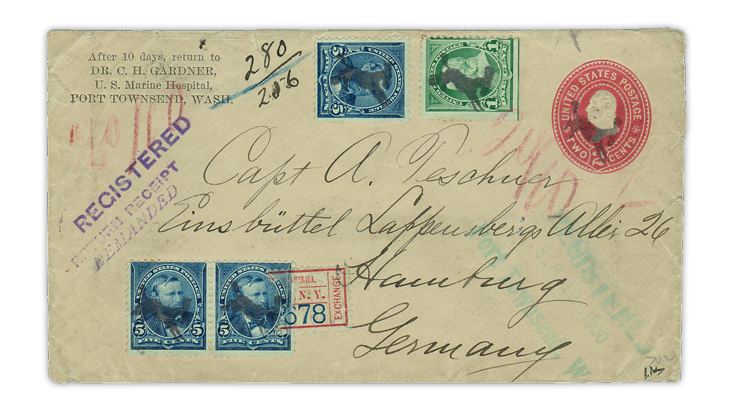 In Classic U.S. Postal History in the Dec. 21 issue of Linn’s Stamp News, Labron Harris introduces readers to a trio of covers sent from Port Townsend, Wash., in 1900 that feature the famous and popular Kicking Mule fancy cancellation.

The Dec. 21 monthly issue of Linn’s Stamp News just landed on the presses and goes in the mail to subscribers Monday, Dec. 7. And if you subscribe to Linn’s digital edition, you’re at the head of the line with early access Saturday, Dec. 5. While you wait for your issue to arrive in your mailbox, enjoy these three capsule summaries of exclusive content available only to subscribers.

Exploring the Kicking Mule fancy cancels of 1898 and later

Labron Harris, in Classic U.S. Postal History, acknowledges the intense popularity of Kicking Mule cancellations among collectors who pursue fancy cancels. Harris pays tribute to C.A. Clinkner who “created a duplex cancel for postmarking stamps using a kicking mule as the canceler. He sold the device to the postmasters of five Western towns: Neah Bay, Wash.; Port Townsend, Wash.; Goleta, Calif.; Susanville, Calif.; and Forbestown, Calif. He then goes on to discuss three registered Kicking Mule fancy cancel covers that were sent in 1900 from Port Townsend. The senders were three well-known stamp collectors who posted “a great deal of registered mail with Kicking Mule cancels to their friends and fellow collectors.” Harris notes that their use of colorful combinations of commemorative and definitive stamps ensured the survival of many of their covers. Near the end of his column, Harris provides an important caveat: “Because of their popularity, the Kicking Mule cancels have often been faked. There are a great many recognized types of fakes known.” He also advises caution when purchasing an off-cover stamp bearing a Kicking Mule cancel.

Matthew Healey opens his Great Britain Philately on an upbeat note: “As the days grow shorter and colder, and the times seem troubled and uncertain, it can be comforting to find refuge in the more cheerful aspects of our hobby — to take the time to stop and smell the flowers.” Beginning with the first British issue to depict flowers, a 6-penny embossed stamp issued in 1854, Healey takes readers on a guided tour of some of the many British stamps featuring flora in a dizzying array of colors. Over the years, Healey observes, “the way flowers are depicted has grown increasingly creative, progressing from straightforward illustrations to innovative photographic treatments, while the formats in which stamps are issued have also grown in complexity.” To put an exclamation point on his assessment, Healey pictures more than a dozen images of lovely flora and horticultural stamps. He concludes by helpfully reminding readers that the American Topical Association offers checklists of flowers on stamps, which are available for a modest cost to members of the association.

Michael Baadke, in New Books, serves up a detailed review of the 2020 edition of the Durland Standard Plate Number Catalog, published by the United States Stamp Society. He begins with a quick summary of the catalog’s history: “Published under various names since 1950, the specialized catalog today lists all known plate numbers used to print all U.S. stamps from 1851: regular postage, airmail and other back-of-the-book stamps, possessions postage, Allied military government stamps, revenue stamps, dummy and test stamps and much more.” The catalog provides plate numbers and positions for each stamp and gives a value for a plate block, strip of coil stamps or booklet pane for each plate number. Baadke discusses specific listings to make the point that some stamps have the same value regardless of the plate number combination used to print them, while others have vastly different values based on the plate number. As an example of the latter situation, Baadke looks at values for the 1981 18¢ From Sea to Shining Sea Flag coil printed using plate number 4 and plate number 6. Depending on the plate number, a plate-number strip of five is valued at $4 or $2,500. Read the entire review to learn which plate number commands the much higher value.