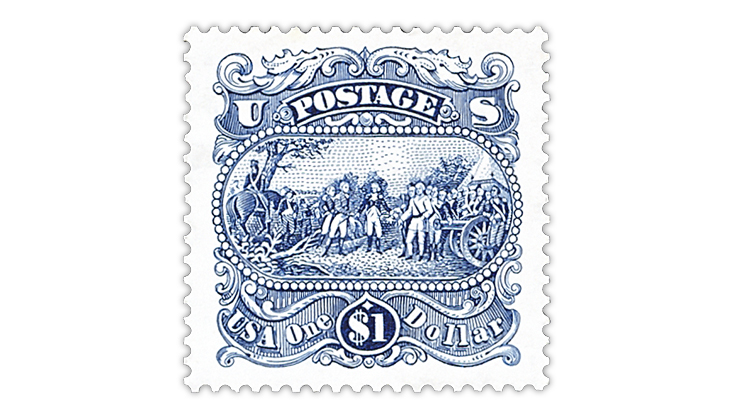 In Philatelic Backstory in the Jan. 18 issue of Linn’s Stamp News, Joe Brockert recounts how the U.S. Postal Service narrowly avoided a misspelling of the name of the artist whose painting appears on the 1994 $1 Surrender at Saratoga stamp.

The Jan. 18 monthly issue of Linn’s Stamp News just landed on the presses and goes in the mail to subscribers Monday, Jan. 4. And if you subscribe to Linn’s digital edition, you’re at the head of the line with early access Saturday, Jan. 2. While you wait for your issue to arrive in your mailbox, enjoy these three capsule summaries of exclusive content available only to subscribers.

U.S. $1 stamp based on Trumbull painting saved from embarrassing mistake

During the intricate process of designing and printing a stamp, numerous checks are made along the way to ensure mistakes are avoided. But as Joe Brockert explains in Philatelic Backstory, a miscue can come dangerously close to seeing the light of day. Such was the case for the United States $1 stamp issued in 1994 that pictures John Trumbull’s painting The Surrender of Gen. Burgoyne at Saratoga. Things initially went well for the $1 Saratoga stamp. “The engraving was completed, color proofs were created and a final color was selected. Printing plates were made, and the stamps went to press in early 1994,” Brockert writes. And then “things became more interesting.” In a twist of fate, Brockert was not present when the press sheets of the stamp were brought to USPS headquarters for inspection and approval. The next day Brockert noticed the “horrible typo” in one of the selvage inscriptions: Trumbull’s name was misspelled “Turnbull.” Be sure to read the entire feature to learn how Brockert saved the day for this attractive $1 stamp.

Fred Baumann, in Great Sets of the World, introduces readers to an impressive set of semipostal stamps that Germany issued in 1933 in celebration of the operatic works of renowned German composer Richard Wagner. Baumann begins with a brief biography of Alois Kolb, who designed the Wagner semipostals. “The nine Wagner Opera stamps in the set (Scott B49-B57) commemorate key scenes or images from Wagnerian operas, most of which have their tangled roots in age-old national narratives, Teutonic myths and Norse legends,” Baumann explains. Some of the stamps were also issued in booklet form, and Baumann provides very helpful pictures of booklet panes and a press sheet from which the panes originate to guide readers in their understanding of how the stamp were produced and processed for postal sale. Baumann also illustrates some colorful examples of postal history connected to the stamps. He ends on a somewhat somber note by observing that the Wagner semipostal stamps were the first German issue printed on paper with the new Swastikas watermark.

In Great Britain Philately, Matthew Healey turns his attention to the 1-penny reddish brown Queen Victoria stamps affectionately known to collectors as the Penny Reds. Healey observes that during their period of use, some 21 billion were issued, which makes the Penny Reds true workhorse stamps. He sets the stage for the rest of his discussion with an important caveat: “At first glance, the Penny Reds all seem pretty much the same, and they are mostly cheap. Even though these stamps may be 140 to 180 years old, many of them can still be bought for as little as 50¢ apiece. Yet they are decidedly not all the same, and many of the rarer varieties can be worth hundreds or even thousands of dollars.” He then goes on to show readers how to identify and group the 10 or so major types of Penny Red stamps, along with tracing the myriad printing and production changes that led to the stamps’ creation. Be sure to look out for Healey’s next column, which will concentrate on the more advanced aspects of collecting Penny Reds.