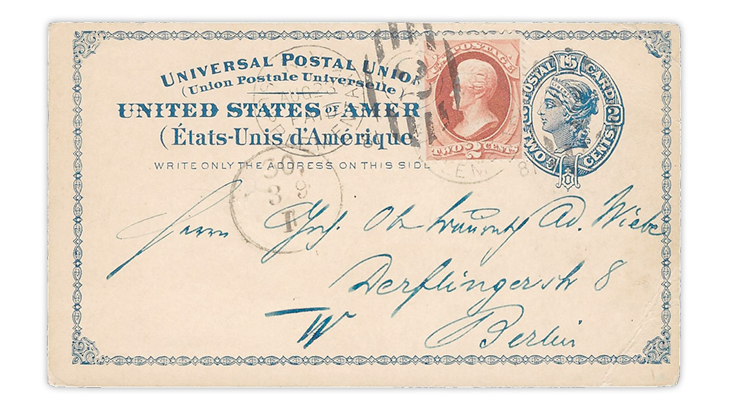 In Spotlight on Philately in the Nov. 16 issue of Linn’s Stamp News, Ken Lawrence provides a nuanced and in-depth exploration of the development and subsequent fascinating evolution of the small cards used to send messages through the mail at lower rates

The Nov. 16 monthly issue of Linn’s Stamp News just landed on the presses and goes in the mail to subscribers Monday, Nov. 2. And if you subscribe to Linn’s digital edition, you’re at the head of the line with early access Saturday, Oct. 31. While you wait for your issue to arrive in your mailbox, enjoy these three brief reviews of exclusive content available only to subscribers.

In the introduction to his monumental Spotlight on Philately column, Ken Lawrence lays out several challenges, among them to “survey the conception, gestation, birth, and 19th- to early 20th-century development and versatility of post- and postal cards.” Lawrence also explores how postal cards and related correspondence cards influence the mails, and he provides guidance regarding the treatment of these items that will appeal to postal historians, deltiologists and students of postal stationery. To support his arguments, Lawrence illustrates more than 50 postal cards and related items. The final item Lawrence discusses, an 1893 World’s Columbian Exposition pictorial card, brings his sweeping analysis full circle: “In the mails would it have been a postal card, a post card, a letter, or a postcard? The answer is, yes.” To fully appreciate Lawrence’s question and answer, you have to read the entire column, which will become an important reference for collectors and specialists alike.

James Chalmers, Rowland Hill and the invention of the postage stamp

Matthew Healey, in Great Britain Philately, pulls the curtain back on the events and times that allowed James Chalmers, a bookseller in Scotland, and Rowland Hill, a former school teacher from a high-achieving family, to invent the adhesive postage stamp, which would revolutionize global communications for decades to come. Most collectors are familiar with Roland Hill and the Penny Black, the world’s first postage stamp. But as Healey observes, “While the Penny Black was ultimately Rowland Hill’s success story, the earliest concrete expression of the idea of a postage stamp came from James Chalmers.” To make his case, Healey discusses pivotal communications between Chalmers and Hill that strengthened Hill’s testimony before a special commission convened by Parliament. Hill’s careful explanation of the problems of the current postal system and his detailed solution, which included uniform postal rates, ultimately led to a competition to come up with a design for the first stamps. There’s much more to this engrossing story, as Healey artfully explains.

“The first recorded king in Danish history is Godfred who lived in the early 800s. This was during Viking times, when many Danes sailed to the British Isles and France in order to trade or conquer new land,” writes Christer Brunström at the beginning of his Nordic Stamp Scene column. He then provides a brief history of the Danish monarchy before launching into a discussion of the four Danish kings and one queen who have appeared extensively on Danish stamps, as well as on stamps from Greenland, the Danish West Indies and Iceland. Denmark issued its first stamps in 1851, but 53 years would pass before a Danish monarch, King Christian IX (who reigned from 1863 to 1906), first appeared on a Danish stamp in 1904. Brunström then goes on to profile the following four monarchs and some of the stamps issued in their honor: Frederik VIII (1906-12), Christian X (1912-47), Frederik IX (1947-72) and Margrethe (1972- ).