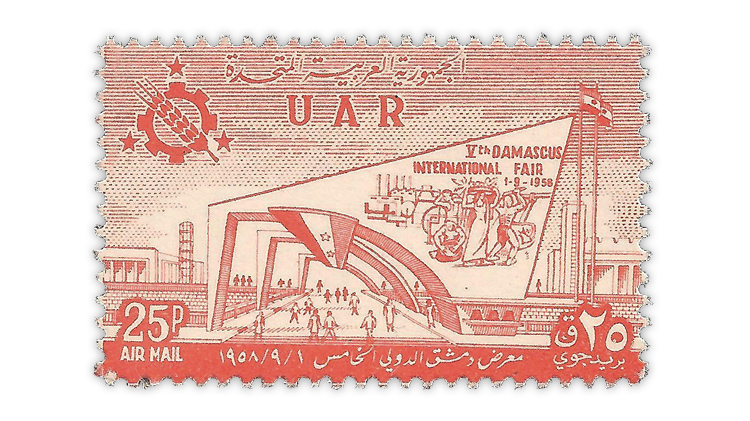 In the Oct. 31 issue of Linn’s Stamp News, Middle East Stamps columnist Ghassan Riachi explores the stamps issued in 1958 by the United Arab Republic in recognition of the Fifth Damascus International Fair.

The Oct. 31 issue of Linn’s Stamp News just landed on the presses and goes in the mail to subscribers Monday, Oct. 17. And if you subscribe to Linn’s digital edition, you’re at the head of the line with early access Saturday, Oct. 15. While you wait for your issue to arrive in your mailbox, enjoy these three quick glimpses of exclusive content available only to subscribers.

In Middle East Stamps, Ghassan Riachi takes readers on a detailed tour of the stamps that the United Arab Republic issued in 1958 to celebrate the Fifth Damascus International Fair. Before digging into the stamp and their production history, Riachi provides some historical background on the United Arab Republic. As Riachi explains, “The United Arab Republic came into existence as the initial step to create a larger pan-Arab country. The hopes were that other Arab states would join.” Understanding this history will help readers better appreciate the design elements of the stamps. Highlights of his column include a table that summarizes the stamps’ production values and close-up illustrations that reveal the location of the designer’s name.

In each weekly issue of Linn’s, either E. Rawolik VI or E. Rawolik VII dissects the contents of a stamp mixture offered to collectors. E. Rawolik is a pseudonym that is also the word “kiloware” (a stamp mixture) spelled backward. This week, E. Rawolik VI looks over a small assortment of worldwide stamps issued between 1908 and 2007. More than 75 percent of the stamps were valued at the Scott catalog minimum of 25¢. While most were common definitives, Rawolik did find a nice surprise: A Netherlands stamp bearing a postmark that could represent a possible new earliest known use. How early? Rawolik has the answer. Enjoy the full review in this issue.