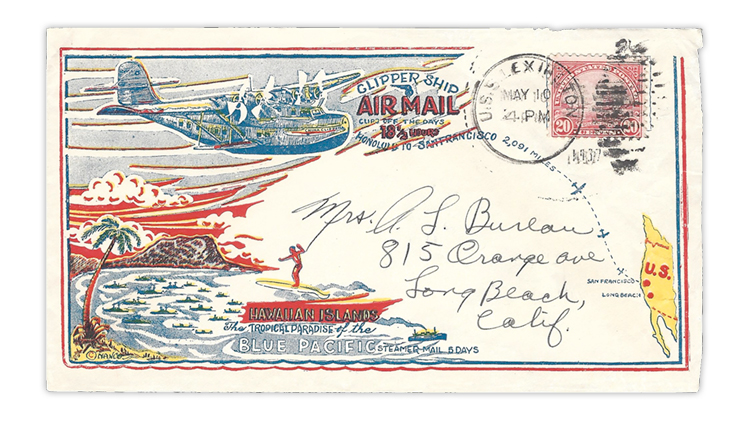 In the Sept. 19 issue of Linn’s Stamp News, Spotlight on Philately columnist Ken Lawrence takes readers on a guided tour of postal history of the popular 1922-38 Fourth Bureau Issue. This colorful airmail cover is franked with a 20¢ Golden Gate stamp and

The 100-page Sept. 19 monthly issue of Linn’s Stamp News just landed on the presses and goes in the mail to subscribers Tuesday, Sept. 6. And if you subscribe to Linn’s digital edition, you’re at the head of the line with early access Saturday, Sept. 3. While you wait for your issue to arrive in your mailbox, enjoy these three quick glimpses of exclusive content available only to subscribers.

The United States Fourth Bureau Issue 1922-38, recently published by the United States Stamp Society, is marvelously detailed examination of all aspects of “the design, production and evolution of the stamps in their cultural, historical, technological and political context, but it does not include their usage,” according to Ken Lawrence in this month’s Spotlight on Philately column. To give readers a feel for the myriad ways in which these stamps were used, Lawrence presents a baker’s dozen of interesting covers that can be seen as guide markers for developing a well-rounded collection of Fourth Bureau Issue postal history. The 20¢ Golden Gate stamp on the eye-catching 1937 illustrated cover pictured here paid the 20¢ per half-ounce trans-Pacific airmail rate from Hawaii to the United States.

After it was announced that the Tokyo 2020 Olympic Games would be delayed a year because of the COVID-19 pandemic, postal administrations reacted differently. Some proceeded to issue their stamps for the games, some postponed their stamps, and others decided to issue stamps both in 2020 and 2021. The unprecedented impact of the pandemic was felt in the world of Olympic philately, as Mark Maestrone methodically documents in a fascinating feature article. “Let’s have a look at how the world’s postal administrations dealt with the first postponed Olympic Games in modern times,” Maestrone writes. “By my count, some 49 post offices issued 190 stamps dedicated to the Tokyo 2020 Olympic Games.” He begins with Italy, which was the first country to connect the delay of the Tokyo Olympics to the pandemic.

In another engrossing feature article, Lawrence F. Skalak III opens his philatelic salute to Tadeusz Kosciuszko in 1776: “Paris was abuzz with excitement in 1776. News from America revealed a revolt by free men fighting British tyranny. Young idealists were stirred to action.” Kosciuszko, inspired by the revolution in America, sailed there forthwith in June 1776 at the age of 20. “Upon arrival, he was immediately welcomed into the Continental Army,” Skalak continues. “As a military engineer, his services were greatly needed.” To tell Kosciuszko’s story, Skalak illustrates eight Polish and three United States stamps. One of the Polish stamps, issued in 1932, features Kosciuszko, George Washington and Casimir Pulaski, another Polish officer who fought for American freedom. Skalak highlights the U.S. 1993 29¢ Great Americans stamp picturing Thomas Jefferson because Kosciuszko drew great inspiration from the author of Declaration of Independence.