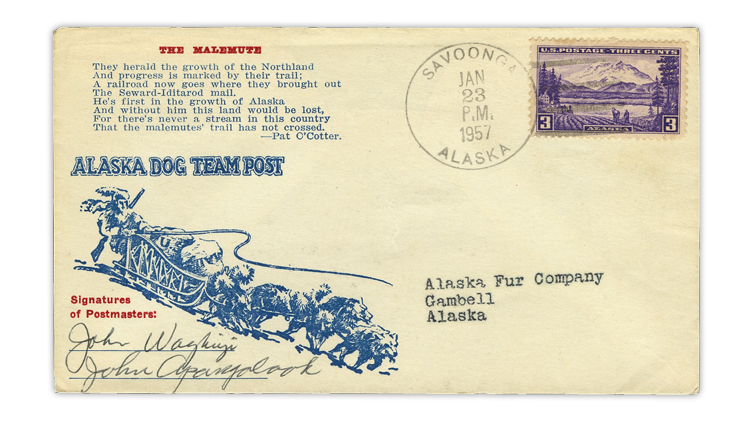 In the Sept. 16 monthly issue of Linn’s Stamp News, Scott catalog managing editor Timothy A. Hodge explores some of the more creative methods used to send mail from origin to destination, whether by land, sea or air. This United States cacheted cover, for

The Sept. 16 monthly issue of Linn’s Stamp News just landed on the presses and goes in the mail to subscribers Monday, Sept. 2. And if you subscribe to Linn’s digital edition, you’re at the head of the line with early access Saturday, Aug. 31. For a glimpse of the splendid content that awaits you, check out these three teasers.

What do camels, dogsleds and hovercraft have in common? Believe it or not, all three have been used to move mail from one locale to another. Using numerous examples of postal history, Scott catalog managing editor Timothy A. Hodge introduces us to some of the animals and assorted vehicles used to transport mail from ancient times to the present day.

Sergio Sismondo, in this month’s edition of Unveiling Classic Stamps, traces the development of Chile’s first stamps, which picture explorer Christopher Columbus. During the period between 1853 and 1867, the “Colones,” as these stamps are known in Chile, underwent 13 printings. As Sismondo explains, one must pay careful attention to the printing method, watermark and color in order to identify the stamps by catalog number.

In Covering the World, postal historian Ken Lawrence highlights a cover sent by a Canadian medical corpsman in 1915 from Lemnos Island in Greece, during the British Empire’s ill-fated attack on Gallipoli. Lawrence’s capsule history lesson reminds us that Jason and his Argonauts first landed at Lemnos during their quest for the Golden Fleece. He also quotes from the corpman’s letter, which “channeled the ancient Argonauts’ amorous exploits.”