Inside Linn’s: Unusual travels of a 1977 registered letter to Germany 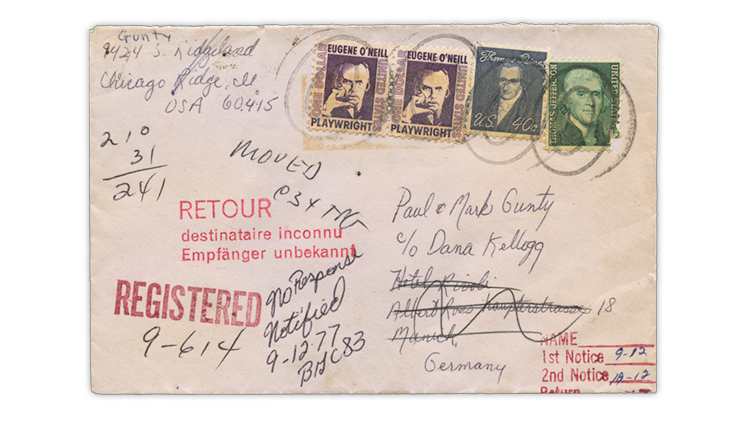 In Dollar-Sign Stamps in the Feb. 6 issue of Linn’s Stamp News, Charles Snee shares the journey of this registered letter mailed in June 1977 from Illinois to Munich, Germany. Included in the franking is a pair of $1 Eugene O’Neill stamps.

The Feb. 6 issue of Linn’s Stamp News just landed on the presses and goes in the mail to subscribers Monday, Jan. 23. And if you subscribe to Linn’s digital edition, you’re at the head of the line with early access Saturday, Jan. 21. While you wait for your issue to arrive in your mailbox, enjoy these three quick glimpses of exclusive content available only to subscribers.

Unusual travels of a 1977 registered letter to Germany

“Sometimes the journey a cover takes is its most appealing feature,” writes Charles Snee in Dollar-Sign stamps. To make his case, Snee highlights the registered letter shown here, which was mailed June 15, 1977, from Oak Lawn, Ill., to Munich, Germany. “The 31¢ airmail postage and $2.10 international registration fee were paid with a pair of $1 Eugene O’Neill stamps (Scott 1294), a 40¢ Thomas Paine stamp (1292) and a 1¢ Thomas Jefferson stamp (1278), all from the 1965-78 Prominent Americans series,” Snee explains. Snee also provides additional details about the cover’s rather uncommon journey, courtesy of one of the addressees who brought the cover to Snee’s attention.

In New Books, Linn’s reviews A Contemporary Account of the First U.S. Postal Card, 1870-1875. “The United Postal Stationery Society has reissued Charles Fricke’s 1973 reference on the first U.S. postal card in a new volume edited by William Falberg,” Linn’s writes. Publication of the new work coincides with the sesquicentennial of the first U.S. postal card, which was issued May 12, 1873, with a large watermark (Scott UX1) and July 6, 1873, with a small watermark (UX3). The book explores in detail the postal card’s forerunner, preproduction, production and postproduction periods. Ordering details are provided at the end of the review.

In an engrossing feature article, Lawrence F. Skalak III takes a closer look at a set of eight stamps that Germany issued in 1964 to honor eight Germans who bravely resisted Adolf Hitler and his Nazi regime during World War II. The issuance was timed to recognize the 20 anniversary of the failed July 20, 1944, bomb plot to kill Hitler. According to Skalak, “These stamps (Scott 883-890; souvenir sheet not listed) honor the seven brave men and one courageous woman who will forever go down in history for their struggle against barbarism.” If you seek inspiration, be sure to read Skalak’s article.

Inside Linn’s: Son created Genesis Graphics covers as tribute to his father