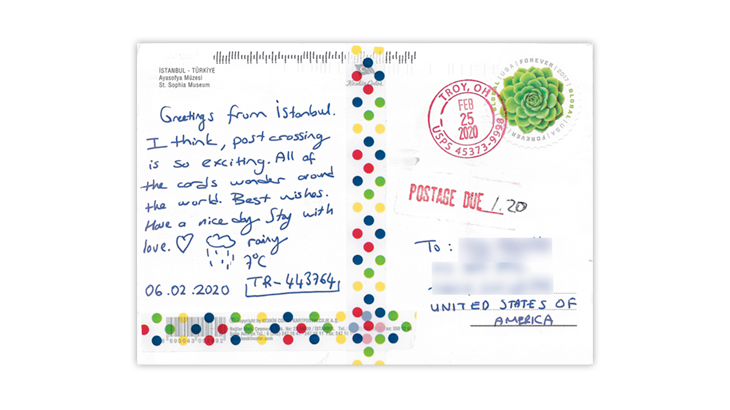 In Dollar-Sign Stamps in the Sept. 7 issue of Linn’s Stamp News, Charles Snee features a pair of covers that document out of the ordinary uses of the distinctive global forever stamps that the U.S. Postal Service has issued for use on international mail s

The Sept. 7 issue of Linn’s Stamp News just landed on the presses and goes in the mail to subscribers Monday, Aug. 24. And if you subscribe to Linn’s digital edition, you’re at the head of the line with early access Saturday, Aug. 22. While you wait for your issue to arrive in your mailbox, enjoy these three brief reviews of exclusive content available only to subscribers.

In 2013, the United States Postal Service issued the first global forever stamp to “satisfy the postage for a 1-ounce first-class letter sent to an international destination regardless of future rate increases,” writes Charles Snee in Dollar-Sign Stamps. Since then an additional seven such stamps have been issued. All eight self-adhesive stamps are round to emphasize the global nature of their intended use. Snee explains that it is not particularly difficult to find on-cover examples of these stamps that were used as intended. However, persistence must be brought to bear to locate out of the ordinary uses similar to the two covers Snee discusses. Be sure to read the entire column to see which one you find more intriguing.

“Any collector interested in plate number coils should visit the website of the Plate Number Coil Collectors Club,” begins William F. Sharpe in Computers and Stamps. Sharpe’s observation might be considered an understatement because the club’s website is simply the best source for in-depth coverage and timely information about these very popular U.S. coil stamps that made their first appearance in 1981. Sharpe suggests that beginners peruse an article titled “What is a PNC?” that is tucked inside the Reference index on the home page. A handful of helpful items are available as free downloads, including a complete PNC singles album. Club members have access to current and past issues of Coil Line, the official monthly journal of the club. Regardless of your PNC experience level, you’ll want to keep Sharpe’s column close at hand.

In each weekly issue of Linn’s, either E. Rawolik VI or E. Rawolik VII dissects the contents of a stamp mixture offered to collectors. E. Rawolik is a pseudonym that is also the word “kiloware” (a stamp mixture) spelled backward. This week, E. Rawolik VI sings the praises of a sample randomly selected from a worldwide packet of stamps from a seller in Texas. The 49 reviewed stamps hailed from 37 stamp-issuing entities. Rawolik also pointedly observed that the “order contained more stamps with Scott catalog numbers of 5 or lower than I can recall ever having received in one mixture.” Also mentioned are three triangle local stamps that are not included in the review because they are not listed in the Scott catalog. Rawolik closes on a high note, observing that the assortment provided “plenty of value, interest and excitement.”

Inside Linn’s: Business reply envelopes get dressed up

Inside Linn’s: Making your own first-day cover album

Inside Linn’s: Remembering the 75th anniversary of the end of World War II