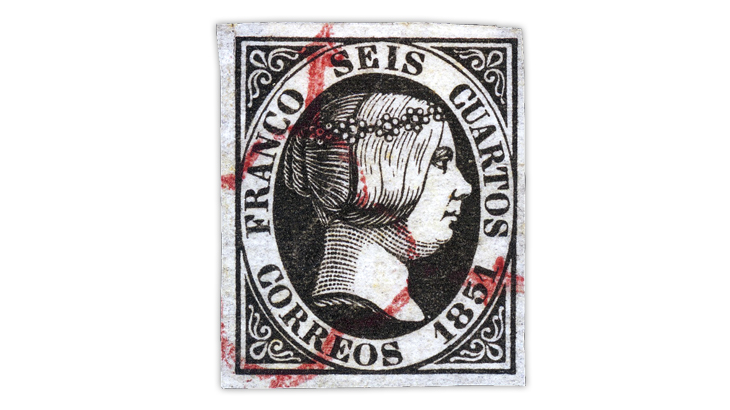 Spain issued its second set of postage stamps in 1851. The six stamps range in denomination from 6 cuartos to 10 reales and feature a profile portrait of Queen Isabella II. Sergio Sismondo, in Unveiling Classic Stamps, introduces Linn’s readers to these i

The Nov. 18 monthly issue of Linn’s Stamp News just landed on the presses and goes in the mail to subscribers Monday, Nov. 4. And if you subscribe to Linn’s digital edition, you’re at the head of the line with early access Saturday, Nov. 2. Here are three vignettes of exclusive content available only to subscribers.

On Jan. 1, 1851, Spain issued a set of six stamps bearing a portrait of Queen Isabella II. As Unveiling Classic Stamps columnist Sergio Sismondo explains, the stamps satisfied a number of different postal rates and proved to be popular with a significant number of businesses. Sismondo reviews the rates in effect at the time and shows how the stamps furthered Spain’s postal reform efforts.

The history of Swedish migration to America

In the mid-19th century, Swedes began migrating to the United States and Canada in significant numbers. Christer Brunstrom, in Nordic Stamp Scene, provides a detailed review of this population shift, which numbered more than 1 million during a seven-decade period. Important personalities and events, as depicted on U.S. and Swedish stamps, bring a powerful visual component to Brunstrom’s history lesson.

A crossover between philately and numismatics

In Great Britain Philately, Matthew Healey discusses British postal orders, which have connections to both stamp collecting and coin collecting. Over the years various adaptations have allowed the postal order to continue its mission in the digital age: sending modest sums of money over substantial distances. And the Postal Order Society, founded in 1985, attests to the popularity of these fascinating collectibles.