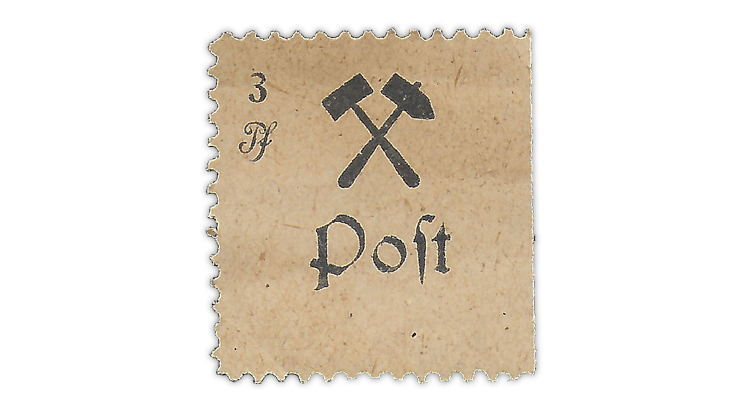 In Computers and Stamps in the Sept. 6 issue of Linn’s Stamp News, William F. Sharpe reviews various online sources that can assist collectors with identifying unusual stamps such as the occupation issue shown here.

The Sept. 6 issue of Linn’s Stamp News just landed on the presses and goes in the mail to subscribers Monday, Aug. 23. And if you subscribe to Linn’s digital edition, you’re at the head of the line with early access Saturday, Aug. 21. While you wait for your issue to arrive in your mailbox, enjoy these three quick glimpses of exclusive content available only to subscribers.

Using the computer to identify a mystery stamp

Most collectors, at one time or another, encounter a strange stamp that is not easily identified at first glance. This can be quite frustrating, but as William F. Sharpe explains in his Computers and Stamps column, there are online resources that can help you identify a mystery stamp, such as the one shown here. Sharpe begins his search by asking for help on the Delphi Stamp Collecting Forum. A helpful collector referred him to two websites that picture examples of his mystery stamp. Dig into the entire column for all the details about this occupation stamp and other equally intriguing issues.

On Sept. 23, 1986, the United States Postal Service issued a $1 stamp in the Great Americans definitive series in honor of Jewish educator and scholar Bernard Revel and to celebrate the centennial of Yeshiva University in New York. As Charles Snee explains in Dollar-Sign Stamps, it was the first $1 stamp in the popular regular-issue series. Not long after the stamp was issued, Snee writes, collectors noticed a symbol that had been secretly added to the engraved portrait Revel. He also pictures a cover franked with a $1 Revel stamp used in combination with other stamps that was mailed in 1989 from Arizona to Portugal.

Linn’s regularly publishes three games to entertain readers: Trickies, a word scramble puzzle by Joe Kennedy; a word search puzzle by D.E. Rubin; and Philatelic Lexicon, a crossword puzzle by David Saks. In this week’s issue, Rubin sends readers on the hunt for the names of various characters from the Harry Potter film franchise. The movies take their inspiration from the books by British author J.K. Rowling. The Scott catalog numbers associated with each character in Rubin’s puzzle refer to the Harry Potter stamps that the U.S. Postal Service issued in 2013.