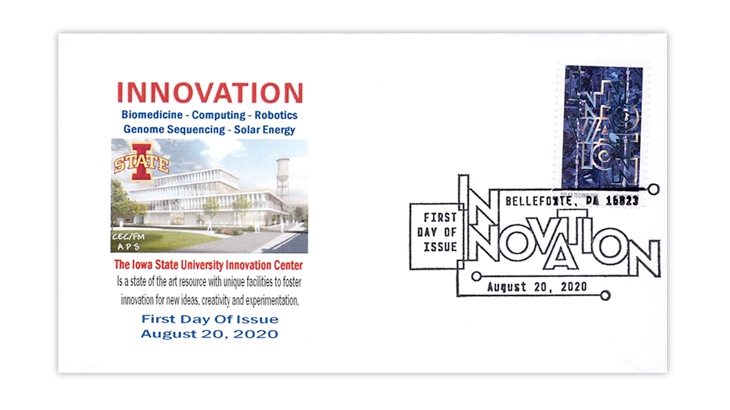 In First-Day Covers in the Oct. 5 issue of Linn’s Stamp News, Lloyd de Vries reviews some of the FDC-related highlights of the Virtual Stamp Show that was held online Aug. 17-22.

The Oct. 5 issue of Linn’s Stamp News just landed on the presses and goes in the mail to subscribers Monday, Sept. 21. And if you subscribe to Linn’s digital edition, you’re at the head of the line with early access Saturday, Sept. 19. While you wait for your issue to arrive in your mailbox, enjoy these three brief reviews of exclusive content available only to subscribers.

The Virtual Stamp Show, held online Aug. 17-22, “was a worthy substitute during the COVID-19 pandemic for what would have been the first Great American Stamp Show,” writes Lloyd de Vries in First-Day Covers. First-day ceremonies were held for the United States Innovation and Thank You forever stamps. This involved prerecording some features of the events and then weaving them together for the video presentations. Some key components for FDC collectors, such as a cachetmakers bourse and autograph sessions for FDCs and ceremony programs, did not occur because there was no physical site for the show. Nonetheless, de Vries describes the show, which was organized in just three months, as “an amazing feat.”

The U.S. Postal Service issued its first stamp intended for Express Mail use on Aug. 12, 1983. The $9.35 Eagle was issued in a booklet pane of three with a face of $28.05. In Dollar-Sign Stamps Charles Snee recounts how the USPS made it easier for customers to buy the new stamp by allowing counter sales of single stamps. At first sales of single stamps was allowed for just 30 days after issue. About two months later, the Postal Service allowed sales of single stamps on a permanent basis. Before making a sale, postal clerks had to remove the stamps from a booklet and dispose of the booklet covers. They also had to follow another important guideline. You’ll need to read the column to get the full story.

Kitchen Table Philately: a stamp shaped like a cola nut

In each weekly issue of Linn’s, either E. Rawolik VI or E. Rawolik VII dissects the contents of a stamp mixture offered to collectors. E. Rawolik is a pseudonym that is also the word “kiloware” (a stamp mixture) spelled backward. This week, E. Rawolik VII reviews half of a mixture of worldwide stamps from a dealer in Florida. Among the 18 countries in the sample, Germany and Russia were well represented, with 14 stamps and 10 stamps, respectively. Germany also had the oldest stamp in the sample, a 1905 10-pfennig Germania. Stamps come in many different shapes beyond the typical rectangle. But some shapes are decidedly more unusual than others. Such was the case for the 1969 7¢ airmail stamp shaped like a cola nut. Do you know the country this stamp is from? Rawolik has the answer, along with other key statistics about the reviewed sample.