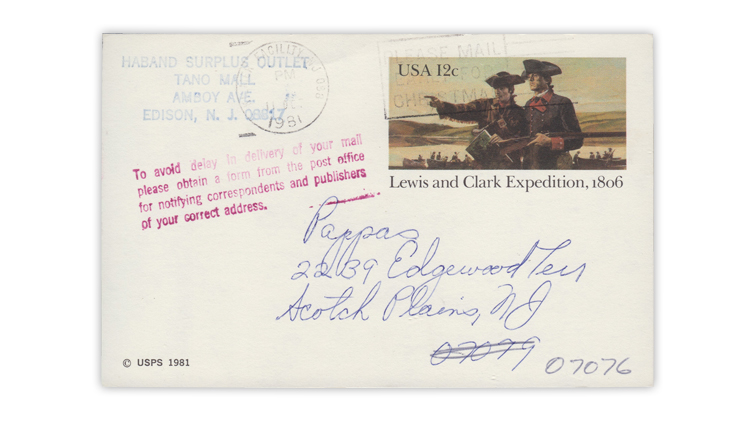 In the Nov. 14 issue of Linn’s Stamp News, The Odd Lot columnist Wayne Youngblood highlights two short-lived United States postcard rates that were in effect in 1975 and 1981.

The Nov. 14 issue of Linn’s Stamp News just landed on the presses and goes in the mail to subscribers Monday, Oct. 31. And if you subscribe to Linn’s digital edition, you’re at the head of the line with early access Saturday, Oct. 29. While you wait for your issue to arrive in your mailbox, enjoy these three quick glimpses of exclusive content available only to subscribers.

In The Odd Lot, Wayne Youngblood begins thus: “Among the shortest-lived United States postcard rates are the 1975 7¢ rate (Sept. 14-Dec. 30) and the 1981 12¢ rate (March 22-Oct. 31).” Finding legitimate postcard and postal card uses during both of these brief rate periods can be a challenge. To make this point, Youngblood presents scarce in-period uses of two postal cards: the 1975 7¢ Charles Thomson (Scott UX68) and the 1981 12¢ Lewis and Clark (UX91). With regard to the Lewis and Clark card, which is a commemorative issue, Youngblood observes: “All other issues aside, properly used examples of commemorative postal cards are always far more difficult to find than regular-issue cards.” The last used postal card Youngblood features looks like a gem at first glance, but he explains why it isn’t. He has additional insights to share, so be sure to read the entire column and save it for future reference.

Tony Wawrukiewicz, in Modern U.S. Mail, digs into the functioning of the Dead Letter Office and the Division of Dead Letters to explain the origins of an unusual handstamp on an unmailable 1922 letter. The handstamp reads, “Placed in General Delivery Because Address Incorrect.” According to Wawrukiewicz, this handstamp was applied to the cover because the mailing address “contained no street or number and therefore had to be placed in general delivery because of an incorrect address.” He also illustrates an example of a U.S. Post Office Department form titled “REQUEST FOR BETTER ADDRESS” that likely would have been sent to the writer of the 1922 letter who failed to provide a complete mailing address.

In each weekly issue of Linn’s, either E. Rawolik VI or E. Rawolik VII dissects the contents of a stamp mixture offered to collectors. E. Rawolik is a pseudonym that is also the word “kiloware” (a stamp mixture) spelled backward. This week, E. Rawolik VI reviews a small batch of 16 stamps from Montenegro, 15 of which picture King Nicholas I, the final monarch of Montenegro. Nicholas ruled as prince from 1860 to 1910 and as Montenegro’s first and only king from 1910 to 1918, according to Rawolik. Read on to learn more about the stamp that did not show Nicholas.