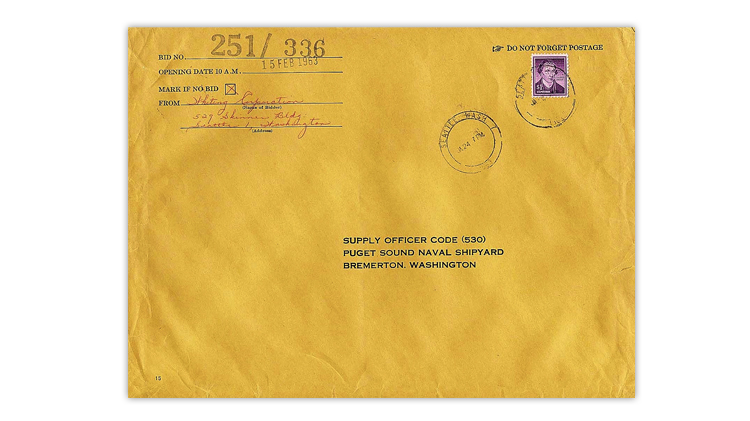 The Nov. 11 issue of Linn’s Stamp News just landed on the presses and goes in the mail to subscribers Monday, Oct. 28. And if you subscribe to Linn’s digital edition, you’re at the head of the line with early access Saturday, Oct. 26. Here are three sneak-peeks of exclusive content available only to subscribers.

In 1857 the maximum weight allowed for a domestic first-class mailing was 3 pounds. As Tony Wawrukiewicz demonstrates in Modern U.S. Mail, the allowed weight limits for this class of mail changed over the next 160 years. In 1968, a split occurred between first-class mail weighing 13 ounces or less and mail weighing more than 13 ounces, up to a maximum of 70 pounds. At the time, the heavier items were sent via air parcel post. Read the column to learn what air parcel post is called today.

When duck stamps and the Civil War collide

Wayne L. Youngblood, in The Odd Lot, reveals the fascinating connection between a United States 1937 $1 federal duck stamp and Albert Woolson, who in 1956 held the distinction of being the oldest living veteran of the Civil War. Youngblood links the duck stamp and Woolson via an autograph request letter that Berrie S. Bell, an exuberant stamp collector, sent to Woolson in July 1956. Woolson dutifully autographed the stamp Bell had sent. As it turned out, Bell’s timing was fortuitous because Woolson died just a couple of weeks later, on Aug. 2, 1956.

In each weekly issue of Linn’s, either E. Rawolik VI or E. Rawolik VII dissects the contents of a stamp mixture offered to collectors. E. Rawolik is a pseudonym that is also the word “kiloware” (a stamp mixture) spelled backward. This week, E. Rawolik VI returns to a seller from Canada who received favorable reviews in the past. Rawolik found the 64 worldwide stamps in the reviewed sample to be of “good value, interesting and well organized.”