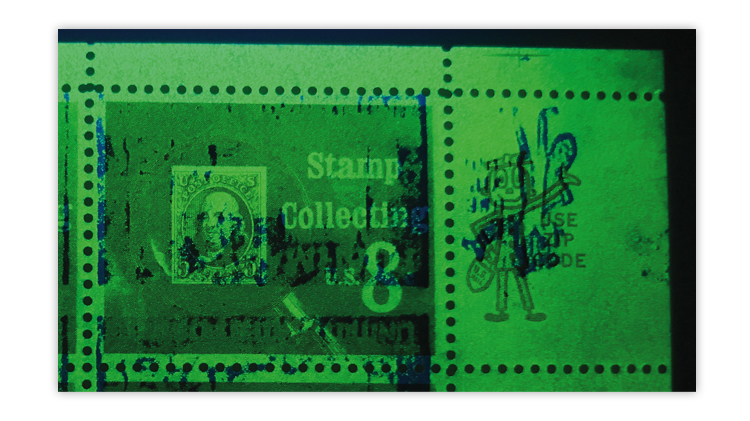 In The Odd Lot column in the June 13 issue of Linn’s Stamp News, Wayne L. Youngblood reveals how a ghostly inverted tagging image of the 8¢ Pharmacy stamp ended up on the 8¢ Stamp Collecting stamp.

The June 13 issue of Linn’s Stamp News just landed on the presses and goes in the mail to subscribers Monday, May 30. And if you subscribe to Linn’s digital edition, you’re at the head of the line with early access Saturday, May 28. While you wait for your issue to arrive in your mailbox, enjoy these three quick glimpses of exclusive content available only to subscribers.

“While tagging ghosts are not uncommon on a single stamp issue (frequently giving the appearance of a double impression of the design), tagging ghosts showing different stamp issues are rarely encountered,” writes Wayne L. Youngblood in his The Odd Lot column. In the case at hand, Youngblood looks more closely at a United States 8¢ Stamp Collecting stamp (Scott 1474) that bears an inverted tagging ghost of the U.S. 8¢ Pharmacy stamp (1473). To set the stage, he shows pictures of the 8¢ Pharmacy/8¢ Stamp Collecting tagging error under shortwave ultraviolet light. He then methodically explains how the miscue occurred. Some key points relate to the sizes of the panes, how the taggant was applied, and the order in which the stamps were printed. He concludes with a brief look at another U.S. stamp bearing a tagging ghost of another stamp issue. Hint: the stamp is from the popular Transportation coil series.

In Journal Entries, David Hartwig digs into the May 2022 issue of Tell, the official publication of the American Helvetia Philatelic Society. The 24-page, full-color issue under review serves up a fascinating group of specialty articles, along with auction news, a book review and an award announcement. Hartwig first draws attention to the cover story, written by Giovanni Balimann, that “clarifies the uses of Switzerland’s first two airmail stamps (Scott C1 and C2), the 1908 30-centime and 50c Helvetia stamps (134 and 139) overprinted in carmine,” according to Hartwig. Among the highlights is the first in a series of articles by Heinrich Mimberg that examine in detail the printing of the famous 1845 Basel Dove stamp. Read the rest of Hartwig’s engaging summary to learn who won the aforementioned award.

Tony Wawrukiewicz, in Modern U.S. Mail, explains how a recently obtained exhibit of dead letter office and dead letter material helped him determine the period when such items were returned to their original senders without a fee. “A dead letter typically can’t be delivered or returned to the sender because of an incorrect mailing address,” Wawrukiewicz explains. He then looks closely at two dead letters that were mailed during the three-year period when no fee was assessed. One of the covers is an Allied Expeditionary Force return envelope that had contents of minimal value. “The cover represents a very unusual forwarding of an item of minor value and was probably an exception because it was a military-related return,” writes Wawrukiewicz. The other cover, also with a military-related connection, is equally intriguing.