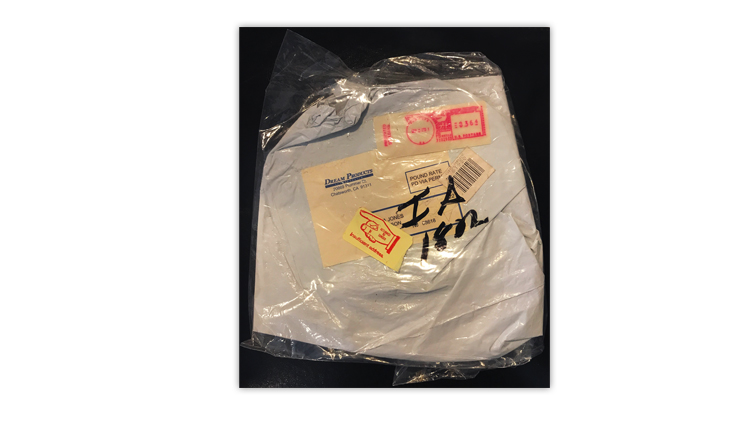 In The Odd Lot in the Feb. 8 issue of Linn’s Stamp News, Wayne Youngblood tells the story of an unusual piece of junk mail that got caught up in the aftermath of the Sept. 11, 2001, terrorist attacks.

The Feb. 8 issue of Linn’s Stamp News just landed on the presses and goes in the mail to subscribers Monday, Jan. 25. And if you subscribe to Linn’s digital edition, you’re at the head of the line with early access Saturday, Jan. 23. While you wait for your issue to arrive in your mailbox, enjoy these three capsule summaries of exclusive content available only to subscribers.

At first glance, the piece of junk mail pictured here looks unassuming. Upon closer inspection, however, a fascinating story emerges, one that is the focus of Wayne L. Youngblood’s The Odd Lot column. The cover is a white plastic wrapper that likely contained a mail-order catalog. The wrapper is enclosed in a U.S. Postal Service irradiation body bag. It was eventually determined that the item was nondeliverable. Under postal regulations in effect at the time of mailing in September 2001, the item should have been destroyed. Instead it became part of a significant chapter of United States postal history through an unusual string of events connected to the Sept. 11, 2001, terrorist attacks. Youngblood methodically explains how the rumpled cover came to be irradiated while in the Postal Service’s possession. It’s a complex, fascinating story you won’t want to miss.

Collectors of Germany will be pleased to see Ed Dietz’s review of the 52 announced commemorative and semipostal stamps that are scheduled to be issued in 2021 by Germany’s postal service, Deutsche Post. Dietz begins his report by noting that a €0.80 stamp will be released in May to honor the birth centennial of Sophie Scholl (1921-43). “Scholl was a German student and anti-Nazi political activist as a member of the White Rose resistance group,” writes Dietz. February will see the issuance of a stamp honoring Friedrich Ebert (1871-1925), who served as the first president of the Weimar Republic following World War I. Dietz points out that Ebert has appeared on a number of other German stamps. The breadth of individuals, events and places to be recognized on German stamps this year is impressive. Be sure to read Dietz’s entire story to get all the details.

In each weekly issue of Linn’s, either E. Rawolik VI or E. Rawolik VII dissects the contents of a stamp mixture offered to collectors. E. Rawolik is a pseudonym that is also the word “kiloware” (a stamp mixture) spelled backward. This week, E. Rawolik VII sorts through a sample of 66 stamps culled from a larger assortment of worldwide stamps. Rawolik reports that 26 countries were represented in the reviewed sample. “Canada dominated with 17 stamps, Russia had 12 and Romania seven. Thirteen stamps were mint and a like number were canceled-to-order,” Rawolik writes. Canada also had the oldest stamp, a 1931 3¢ red King George V definitive. Topical subjects include mammals, flowers, space and birds. Of the 66 stamps, 57 were valued at the Scott catalog minimum of 25¢. The highest catalog value, $1.50, was for a 1975 commemorative from Surinam. To discover this stamp’s subject, read the full review in this issue.