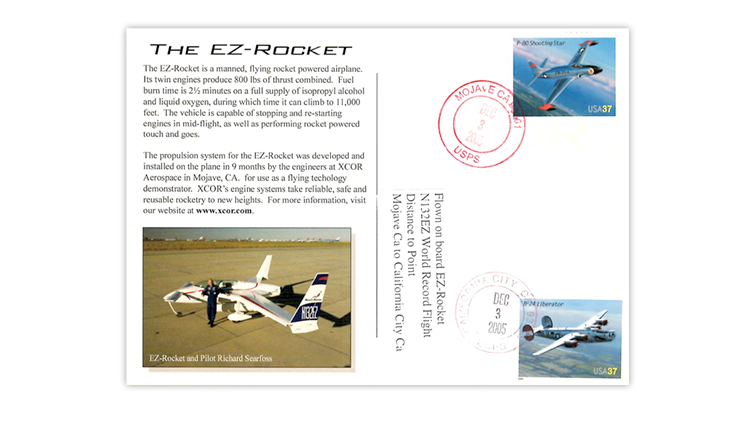 The July 25 issue of Linn’s Stamp News just landed on the presses and goes in the mail to subscribers Monday, July 11. And if you subscribe to Linn’s digital edition, you’re at the head of the line with early access Saturday, July 9. While you wait for your issue to arrive in your mailbox, enjoy these three quick glimpses of exclusive content available only to subscribers.

“XCOR Aerospace was founded in 1999 as a spaceflight and rocket engine development company,” writes Charles J. Vukotich Jr. in his Exploring Astrophilately. Vukotich was prompted to write about XCOR after he reorganized some of his extensive holdings of aerophilatelic space postal history. He concentrates his efforts on XCOR’s EZ-Rocket, the first manned, privately built rocket plane to transport United States mail. The milestone flight, with famed aviator Dick Rutan at the controls, took place Dec. 3, 2005, and lasted for about nine minutes. Vukotich illustrates a cacheted cover that he created that was carried aboard the flight. The other flight covers illustrated in his column are just as impressive.

The rise and fall of Marshal Tukhachevsky, ‘the Red Napoleon’

Rick Miller opens his Stamps of Eastern Europe column with the June 12, 1937, execution of Mikhail Nikolayevich Tukhachevsky, marshal of the Soviet Union and former chief of the general staff of the Red Army, during Stalin’s purge of senior leaders of the Red Army. He then recounts the remarkable life of this impressive military commander who was born in 1893 to a noble family “with a tradition of military service.” Among the more fascinating philatelic items Miller uses to tell Tukhachevsky’s story is a set of five White Russian propaganda labels picturing White Army commanders whom Tukhachevsky and other Bolshevik commanders defeated on the field of battle. Aficionados of military history will find Miller’s column a most engaging read.

In First-Day Covers, Lloyd de Vries summarizes some of the significant changes that have affected first-day cover servicers. He notes, for example, that the American First Day Cover Society “is now one of the largest servicers of United States first-day covers for new issues.” De Vries explains that this occurred mainly because of the demise of other major producers of FDCs, such as ArtCraft. But not all is doom and gloom, according to de Vries. The ubiquitous presence of home computers and printers now makes it easier for collectors to make their own FDCs. And the 120-day period to obtain a first-day postmark for a U.S. stamp means that advance planning is not as necessary. If you are contemplating making your own FDCs, look to de Vries’ column for inspiration.