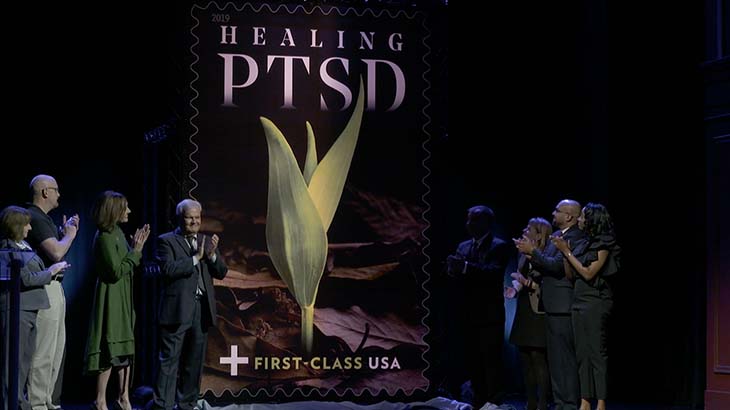 David C. Williams, vice chairman of the Postal Service’s board of governors, is pictured to the left of the Healing PTSD stamp design, which he unveiled at the Dec. 2 first-day ceremony for the stamp in Charlotte, N.C. Video image courtesy of the USPS.

The new stamp raises funds to help treat those impacted by PTSD. Net proceeds will be distributed to the U.S. Department of Veterans Affairs, which oversees the National Center for PTSD.

Speakers included Chuck Denny, founder of the American Veteran Foundation, whose late father had a vision for the stamp. During the last nine years of his life, Garland Denny — a Korean War Navy veteran — pitched his idea to governors, members of Congress and President Barack Obama.

“He would be totally pumped to be here with you people!” Denny said during his opening remarks. “But one of the first things [my dad] would say is without our veterans, we would be in trouble in America. ... I’m glad that he took the time to teach me that.”

Denny said Garland had a vision and desire to do something to leave the world in a better place. The road wasn’t always easy, and there were many setbacks, but Garland worked tirelessly.

“He figured out on his weakest days how to influence the future,” Denny said. “And we all have the ability to do that. It’s just, do we have the drive in us to do that, like Garland did?”

When retired U.S. Marine Corps Sgt. Maj. Dan Miller was called to the podium, he looked at the stamp’s imagery of a green plant sprouting from the ground covered in fallen leaves and said, “It’s just an incredibly beautiful picture to me.” The image symbolizes the growth and hope that comes with the healing process.

Miller, a spokesperson for the Wounded Warriors Project, spent 30 years in the Marine Corps and 24 years as a police officer. During his three combat tours in Iraq, he was wounded twice and lost 16 of his Marine brothers.

“When I came home, people would ask how I was, and I would say ‘I’m fine,’” Miller continued. “The stigma associated with PTSD was so strong within the military; you were afraid to be honest with yourself or others, and to raise your hand and ask for help was just unheard of.”

When Miller retired from the Marine Corps in 2015, he tried to understand the emotions of fear, sudden anger and isolation he was experiencing. He had yet to ask for help, though, because of the aforementioned stigma. At the same time, he was taking care of his Marines, but that was proving difficult because he hadn’t sought his own treatment.

“Finally, one day it dawned on me that unless I took that step forward and admitted that I had something going on and it was not something I could deal with on my own, then I was heading down a very dark, dark road that would end [very badly],” he said.

Miller has lost nine fellow Marines to suicide. “I couldn’t stop them,” he said. “I myself came very close one day to calling it quits because I couldn’t deal with what was going on; because I was afraid to ask for help.”

Miller’s life changed when he became involved with the Wounded Warrior Project, where he learned to own his PTSD and take the steps necessary to move forward.

There are thousands of people suffering from PTSD in the United States. Miller praised the Healing PTSD stamp, and he hopes it will encourage sufferers to raise their hands and seek help.

“For that, I thank the U.S. Postal Service. You are going to save lives.”

Dr. Paula Schnurr, executive director of the National Center for PTSD, shared the numbers: Almost 6 percent of the U.S. population will have PTSD at some point in their life, and almost 5 percent of Americans have had it in the past year. The percentage is even higher among first responders and those who served in active combat — current estimates indicate that between 15 percent and 20 percent of the veterans who served in Iraq or Afghanistan have been affected by PTSD.

“We can offer a message [of hope] to survivors … that PTSD is not a life sentence,” she said. “It is simply a disorder that can be treated.”

Medications and psychotherapies can help those with PTSD, but Schnurr said they don’t always work for everyone. The Healing PTSD stamp will help fund further research in this area.