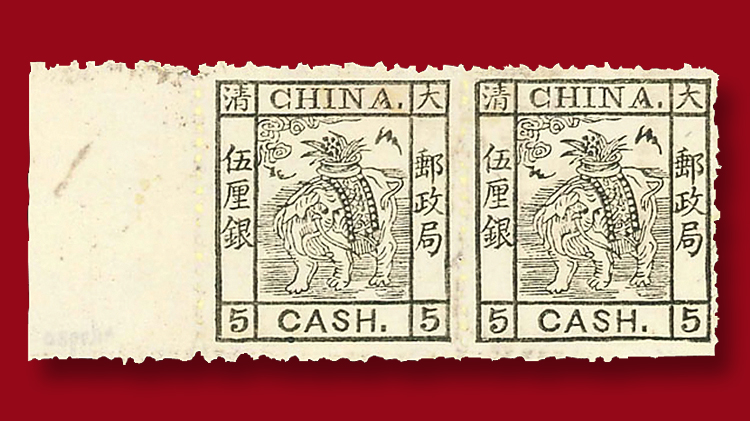 A plate proof pair of China's 5-cash unaccepted elephant-design essay is being offered during the Dec. 10-12 InterAsia auction series in Hong Kong. 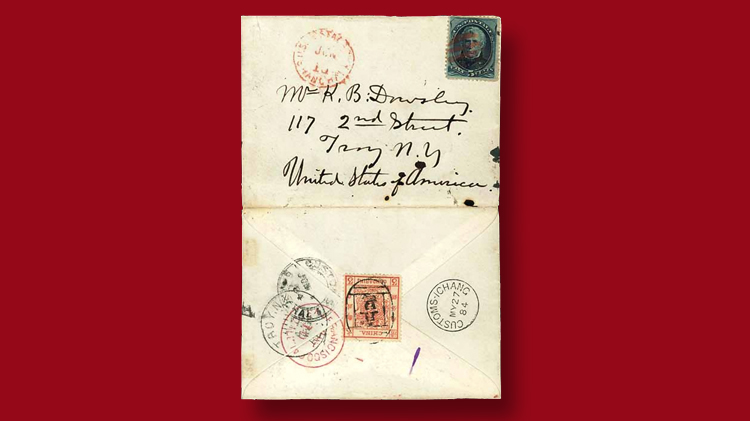 An 1884 cover sent from China to the United States has a Large Dragon-U.S. combination franking. The cover has an auction estimate of approximately $191,550 to $255,400.
Previous
Next

Unissued Chinese rarities are among the many stamps and postal history items that will be offered during InterAsia's Dec. 10-12 auction series.

The auction firm has compiled four catalogs for the sales: the Jane and Dan Sten Olsson collection of China's Large Dragons stamps (sale 4, Dec. 10), the People’s Republic of China and liberated areas (Dec. 11), Hong Kong and treaty ports (Dec. 12), and stamps and postal history of other Asian countries (Dec. 10-12).

An elephant design was considered for China's first postage stamps, but not accepted. One highlight of the Olsson collection sale is a plate proof pair of China's 5-cash elephant-design essay on thin native laid paper.

InterAsia notes that this pair, perforated at top and bottom, has “... excellent colour and sharp impression on this delicate paper which has remarkably retained its overall freshness, well centred with intact perforations, very fine state of conservation for this rare and elusive essay.”

The Olsson collection also features an 1884 cover sent from China to the United States. It is franked with a U.S. 5¢ Zachary Taylor stamp and a single China Large Dragon 3-candarin stamp. It is one of 11 such Large Dragon-U.S. combination frankings known, according to the brief census provided by InterAsia.

Among the unissued People's Republic of China rarities offered in the Dec. 11 sale are the two 1968 8-fen Great Victory of Cultural Revolution stamps, one showing Mao Tse-tung and Lin Piao and the other depicting a map and workers. The latter stamp is also known as the large-format Whole Country is Red stamp.

A note in the Scott Standard Postage Stamp Catalogue reads, “Two values were prepared to celebrate the Great Victory of the Cultural Revolution but were not issued, although a few examples have entered the market place."

The catalogs for the InterAsia auction series can be viewed online at www.interasia-auctions.com. The firm also has an online bid sheet available on the website.

The sales will be held in the Marina Room on level 2 of the Excelsior Hotel in Hong Kong’s Causeway Bay area.